What Happened in Red Deer

I was so excited to go. But I'm afraid to say that the Mane Event was a bit of a bust for me this year.

We arrived to catch most of the jumper clinician. Unfortunately, he wasn't the greatest speaker, and they had too many riders with 6 in the group to get through the exercises in a timely manner. Four riders would have probably been the optimal number. The exercises were pretty basic (the topic was something about cavaletti) - some trot poles, the circle of death with poles, and a few low jumps. The only thing I took away from the session was that if things are falling apart, it's better to stop, regroup and organize, and start again. Better to do fewer poles/cavaletti well than do a bunch badly. 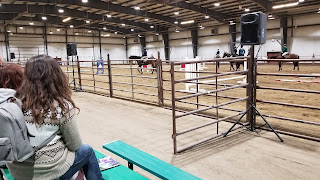 The driving guy wasn't very good either - he discussed the tack check he did with each of the participants, but they were on the far side of the ring so the auditors couldn't see what he was talking about. Then he watched them trot around a few laps, and asked them what they wanted to work on. There was supposed to be a theme to the session - something about pressure and your horse, so it was disappointing that he didn't seem to have a plan.

It's pretty sad that watching the dressage was the most exciting part of the day. It's not that the information was new or overly interesting, it's that the clinician had a sense of humour and kept things moving.
The trade show was okay - some vendors that were traditionally present were missing, but there were some new ones to take their place. The tack shops that were present didn't have anything that I needed for the prices that I was willing to pay, but I did pick up a 15' training lead that has a loop at the end instead of a clip.  There were less freebies than previous years - even the feed company that gave out coupons for free bags of feed last year only gave out $10 coupons this year. If I was shopping for a $100,000 horse trailer this was the place to be - but I most definitely am not.

I entered a bunch of draws, and managed to have my name pulled for one. I won a bag of a protein/amino acid supplement. It's good for helping horses build toplines, which I don't have a problem with, so I might see if someone at the barn wants to buy it.

We left before dinner time since there wasn't anything else we really wanted to see.

So yeah, I was disappointed in this year compared to other years. It's still a great value for the admission ($15 if you buy your tickets online) and I'll definitely continue to attend. I just won't have high expectations on what I expect to see.