I survived yet another year of a crazy work schedule. I've got a few days off over the holidays so I can get the ponies going again. 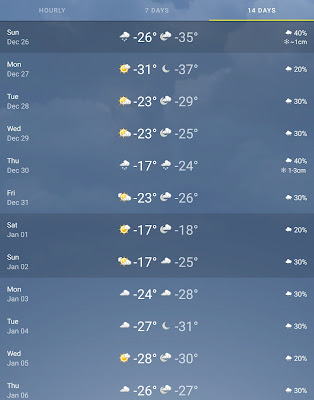 Yeah, it's gonna be a wee bit chilly for the foreseeable future.
Thus, the ponies will have more time off, stuffing their bellies with an uncovered round bale (the net I bought got buried underneath a bunch of snow and is likely frozen to the ground after the freezing rain that pre-empted the snow).
I need to try to peel myself off of the sofa daily and do some physiotherapy-type stuff so that when I do get back in the saddle I will be able to walk again.
But in the meantime, there are holidays with the family to enjoy, high calorie foods to consume, and Lego sets to keep my hands busy while binging Netflix.
Happy holidays, everyone! Stay warm and cozy and Omicrom free!

Short riders - rejoice! I have found boots off the rack that are the right height!

The bad news is that they are winter boots. Well, bad news if you live in a warm part of the world. For those of us who live in the land of ice and snow for 6 months every year, it's great news!

Up here in the Great White North there is a chain of equestrian stores called Greenhawk. A large portion of what they sell are their own house brands. I consider most of their own branded stuff to be of medium quality, and will never buy it at regular price as it always goes on sale for 30-40% off.

They sell boots under the brand name Auken. Last winter they added a few winter riding boots to the line. A couple of people I ride with had one of the styles and were quite happy with them.

I had seen this lace-up style last winter and tried to get them, but they were only available online, and only in sizes well above mine. Thus, I didn't get them. 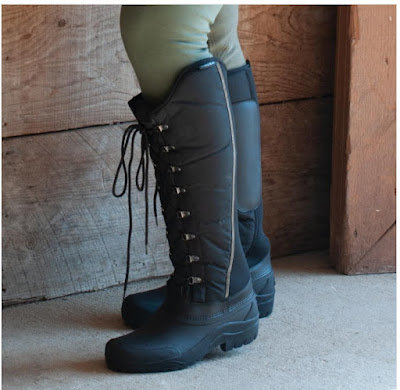 Although I had no intention of buying any horse stuff this year, I still had a look at the websites, just in case I found a deal that I couldn't pass up. Good thing that I did, because the boots I wanted last winter were back in-stock in all sizes and 40% off! Score!

As I was unsure about sizing, I ordered sizes 7 and 8. I'm generally a 7.5, which is 38 european. The size chart showed the 7's as 38's, so I wasn't sure if I would need the larger or smaller size. There is a store in town though, so I would be able to easily  return the size that I didn't need - which turned out to be the 8's.

I had a bit of a debate as to which size to keep. The foot on the 7's is just the perfect size, but for winter boots I am happy if the foot is a bit loose to let air circulate a bit better to keep my feet warmer. However, the 8's were then too loose in the heel and ankle which I thought might affect me once in the saddle, so I went with the smaller size. If I had planned to wear a second pair or really thick pair of socks then I would have stuck with the 8's.

Most importantly- they are the perfect height for my 15.5" calfs!  In the picture on the website they don't go right up to the model's knee, so I think that they are designed to be shorter than normal tall boots, but that works for me! So if you are have long (or even average length) legs, be forewarned that they will be shorter than your normal riding boots. On my little legs, they hit the perfect spot just below the knee.

The foot is lined with faux-fur. The leg is a mix of an insulated material and neoprene and has a synthetic leather wear patch on the inside leg. There are reflective piping stripes on the outside and back of the leg.

The tongue in front is stitched on the sides to about 2/3's of the way up, so you will have to use the zipper at the back to get in and out of the boots. Because the tongue is padded it's a little bit tough to get the laces really snug, but that's pretty minor.

The sole is thick with a good tread and has an appropriate heel for riding.

The weak point on these boots will definitely be the zipper. It's not nearly as robust as I would like. In order to prevent an early demise of the zippers I plan to loosen the laces before zipping up, and then tightening them. In reality my winter riding clothes add differing amounts of bulk depending on what I'm wearing, so this will most likely be a requirement anyway.

Unfortunately, at this point I cannot attest as to how warm they are as it looks like I won't manage to get back into the saddle until New Years - and then only if it warms up significantly. It's looking like we'll be in the midst of a cold spell once work dies down for me at Christmas and the ponies will be getting an extended vacation. I'll update you once I've tried them out.

Overall, I think that they are worth what I paid for them ($70 after taxes, regular price $110 + tax), but I don't think that they will hold up for many winters if they are worn all winter at the barn. The zipper just feels a little too light. I plan on only wearing them while riding as I have very warm Muck Boots to wade through the snow in, so with that, and loosening the laces before zipping up I hope to extend their life to last me a few years. I probably won't find short enough boots ever again!

(And I didn't even have to try to get to the tack store to return the other pair - I offered them up in my barns Facebook group for what I paid and they were claimed within minutes. It was such a good deal I wanted to give someone else a chance to get it!)

'Tis the season when I work too much and the ponies get a lazy vacation.

I've barely done anything with them for the last month. About once a week I manage to get out to see them and make sure limbs are pointing in the appropriate directions and make my best guess as to how many blanket layers they should be wearing based on the forecast for the next few days. Until tonight, I haven't even managed to get them into the arena for a run as it has either been too busy or stupid early when I've been out.

Cisco is pretty sure that he's now a feral horse and is convinced that leading and tying is more of a suggestion than a requirement. Of course, his version of being bad is pretty tame - mostly sticking his hooves in his ears and going "lalala I can't hear you" and doing the idiot dance in the barn. Thankfully, he remembered that he has manners and was a perfect gentleman for the farrier last week.

I made it through the Black Friday sales relatively unscathed. Not totally though. I picked up the newish Knix zipper front Catalyst sports bra for a good price - so far I'm liking it, though I haven't ridden with it yet.

I also ordered some winter riding boots from Greenhawk that I'm hoping will work for me. They look like they're shorter than normal tall boot height, and they are laced down the front, so the chance of them fitting my short, wide legs is a bit higher than normal. I tried to get them last year but they never had my size, so I was happy to see them available, on sale (only $65!),  and both possibilites for my size in-stock. I ordered both the size 7 and 8 as I usually wear a 7.5, so we'll see which pair fits best and return the other ones.

So , yeah. Not much happening here.

I hope everyone is enjoying time with their ponies and that those on either side of the continent are safe from the flooding. Believe me - we're not complaing too loudly about the dump of snow we had last week!