One of my Black Friday purchases this year was the Shedrow North Combo Turnout blanket from Greenhawk. It is a turnout blanket with a liner system that changes the warmness of the blanket, like the Rambo Duo. But way, way, less expensive.

I've never been a huge fan of the Greenhawk blankets. Mostly because they just haven't fit my horses well in the shoulders. Farly had really big shoulders, and the best fit for him was Bucas. Phantom has a bit of a low set neck, so I think that's why they don't fit her as well as I would like.

In the 7 months that I have owned Cisco, he has been pretty hard on his blankets. Trust me - he could be much worse. But he is definitely the worst horse that I have owned when it comes to blanket destruction. So I am not willing to spend a lot of money on new blankets for him. He's not getting a Rambo anytime soon.

Here are my initial impressions.

The blanket is made from 1200D fabric. It's a charcoal grey colour, with bright blue binding. It's an okay colour. I'm sure it will hide the dirt nicely. The shell has 100 grams of fill, and comes with a 200 gram liner. It also includes a detachable neck cover. There are reflective strips on near the tail

I would say the blanket fits true to size. Cisco seems to be good in 78" blankets, and this one fits him fine. The drop isn't terribly long though, so if you have a horse who is really deep in the girth area, this could be a problem.

It does seem to be a bit bulky across his back - he looks like he has no shape across the top. This could be just because it is new and stiff, and my guess is that it will relax after it's been worn for a bit. 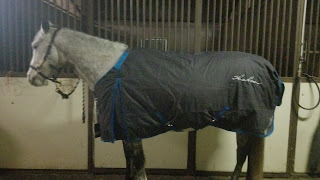 The fit around the neck is okay. It sits in a good spot on the withers - not too far back. It sits okay on the chest - not too high or too low. It's just not shaped as nicely as Phantom's Rambo from withers to chest. 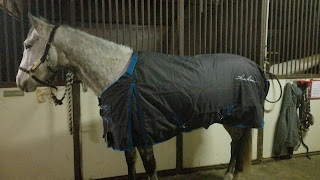 The liner (this is the 300 gram one) seems to fit shorter, but when the top layer is on it attaches without issue. Like the Rambo Duo, the liner attaches to the shell with velcro tabs at the top of the neck, and with clips next to the tail cord. The fabric is a bit stiffer than the Rambo liners, but again, this could be just due to newness. There is a sheepskin patch at the withers. 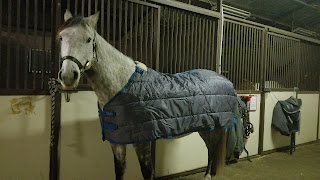 A nice touch is that the liner has the weight embroidered on the velcro tab on the chest. The Rambo liners don't have this, and you have to find the stitched on tag to find the weight. Bonus point to Greenhawk.

The shell has two surcingle straps that crisscross underneath, no leg straps, and a rubber covered tail cord. With the 300 g liner on, there wasn't a lot of strap left. Cisco isn't narrow by any means, but he's not that fat either. When the liner was off the strap length was no issue.

The neck cover is a bit of an issue. 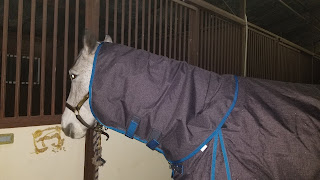 It's really long! Cisco looks like he's a giraffe wearing a turtleneck. There's a lot of extra hood after the velcro straps. I think I will have Pony Grandma work some magic on it and get it to fit a bit better.
The neck cover attaches to the blanket with velcro strips on either side of the withers.

My initial impressions are good. Overall the blanket seems to fit okay (minus the neck cover). I need to see that it doesn't twist while being worn since there are no leg straps before giving it my full approval. Cisco will continue to wear his suit of armor (his Kensington fly sheet) over it to make sure it survives the winter, so I won't really be able to attest to its durability. Unless he kills it of course.

It's definitely no Rambo Duo, but at a quarter of the price, it seems to be a pretty good substitution.