When you own horses for a long time, you sometimes accumulate things that, well, normal people probably don't have kicking around in their house.

I have one such thing that I keep forgetting about. I've had it for 30 years, sitting in a jar, sometimes in a drawer, sometimes on a bookcase. I was reminded of it while reading The Hunky Hanoverian's post about her horse Rio's surgery.

It's a splint bone.

Or rather, part of a splint bone. About a 2" part.

My first pony, Sunflower, had a bit of a bad year around 1989. We figured that she tried to kick another horse (being the cow that she was), missed the horse, and connected with a wood plank on a fence. Which resulted in a broken splint bone in her left hind leg. This was only the start of one of those "crappy things happen to horses" years.

So off to the local vet clinic she went. I was only 14 years old at the time, so I don't remember much of the true scenario. I imagine that she went under general anesthetic, but I don't know for sure. I know I was completely unaware of the risk that it would involve,  as I had only been riding for about 3 years. She stayed at the clinic for about a week and came home to be rewrapped daily by me (I remember using Cool Cast bandages). After a while, it became apparent that she was experiencing some pain where the bone had been, so the nerves were cryogenically frozen along that area, and she forever more had 4 hairless dots along the outside of that leg.

At least, that is how I remember it all, from my child's perspective of 30 years ago.

My party favour when I picked Sunflower up at the vet was the chunk of bone in a jar of formaldehyde. 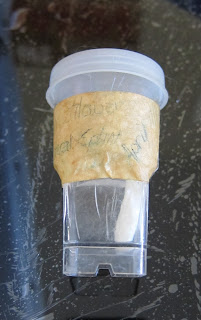 The writing on the masking tape on the jar says "Sunflower, Left lateral splint bone, April 11/89". I guess that was my birthday present that year - my birthday is April 8th (bad things tend to happen around my birthday, I tend to get really paranoid around that time).

Over time, the formaldehyde has either leaked out or dried up. I didn't realize the condition of the jar until I took these photos - not sure if all the cracks actually go all the way through the jar or not.

Do you think it would be weird if I were to take it to the vet with me on my next visit and see if they would top up the formaldehyde?

This bone cost $800. I'm not getting rid of it anytime soon.

What weird horse things do you have in your possession?
at March 08, 2018