I spent most of the day out at the barn on Tuesday. It wasn't my plan, it just how it worked out.

I had to go out in the morning for the farrier. My guys were done by about 12:30.

My friend had a vet coming for 2 pm. She was getting teeth and vaccinations done. I had called the clinic the day before to get him to bring another bottle of Ventipulmin out for Phantom, and I was hoping to get him to check the teeth of my guys to see how badly they need to be done. Cisco is at just over 2 years, and Phantom is just under.

Well, you know how afternoon vet appointments are never on time? Yeah, he was about an hour late. And it was really hot out - the first bonafide summer day of the year. I should have done something useful in my downtime, but totally didn't want to.

So I just sat around and chatted, and helped my friend put her saddle that she had the farrier widen the gullet plate for back together.

When the vet arrived, he said that Phantom could wait another 6 months (yay!) but Cisco needed to be done. Did I want him done today?
At first, I said no. But he roped me in by saying that his visit today was only getting charged a half call out fee since they were also going to somewhere else nearby, so if I got Cisco done it would only cost me a quarter call out fee. So I said yes.

I told the vet that Cisco is not a cheap date - when he was gelded at (I think) 13 months old it took enough sedative for an 800lb horse to knock him down. So Cisco was sedated a little bit on the heavier side for his dental appointment. 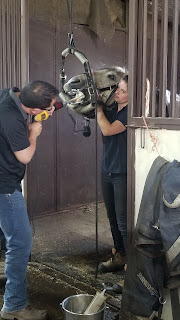 Thankfully it was enough - he was a very good boy. This is the second time that I was told his teeth are really good with no issues and just needed a simple floating, so hopefully that continues in the future.

The floating was quickly done. And then the wait for the sedated horse to wake up.
I couldn't really think of anything I needed to torture my horse with while he was having his nap. He didn't need his sheath cleaned, or his mane pulled, or any clipping done. The only thing I did to him was to rub some zinc oxide onto the sides of his mouth. He had some crusty crud that popped up over the last couple of days - not sure if he got into something or if it was flies. I'm pretty sure he wouldn't appreciate me putting the zinc on if he had the option.
An hour after getting his teeth done, during which Cisco had the longest pee I think I've ever seen a horse have, he was finally ready to have his dinner. Unfortunately, he missed his dinner in his paddock, and I had to feed him in the stall and wait for another hour so I could turn him out. 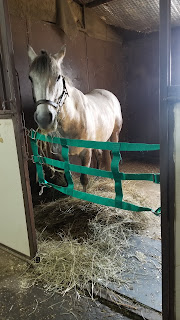 I finally got to head home a little after 6pm. It was a long day, spent mostly on my feet, and I achieved nothing.  Tomorrow's going to be even hotter so I've got to get out to the barn early to get Phantom ridden and so that I can be home in air conditioning by the afternoon.