Tuesday was my one day off in the week.  I finally felt good (my last two days off I've felt crappy) but I still wasn't able to ride. Why? Because I had a whole bunch of things to do. One of which was clean a poopy horse butt.

I forgot to take before and after pictures. But trust me - it was gross.

Phantom tends to have an icky backend whenever she wears a blanket. It's not that she has constant diarrhea, it's more like with a tail flap on her blanket she doesn't lift her tail out of the way enough. It gets stuck on her tail, which then smears poop all over anywhere her tail touches.

In winter, it also freezes. Which is probably better because then it doesn't smear. Except that it freezes in chunks on loose hairs of her tail or on the tail cord of her blanket.

In summer, it's no big deal to be able to clean her up on a regular basis. Winter isn't so much fun. She lives outside 24/7, so she has to be dry before she can go back out. My barn doesn't have hot water in the wash rack, though there is hot water from a sink that I can use in buckets. Also, polar pony fur doesn't dry very fast with a regular hairdryer.

I put her tail up all winter to at least try to minimize the damage. It definitely helps. But it doesn't work miracles. 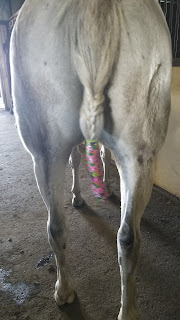 Thus, I had to don the kitchen rubber gloves on Tuesday to do some scrubbing.

I had a helper = a 10 year old barn rat was killing some time before her lesson and she wanted to help. I don't think she believed me when I told her how poopy Phantom's butt was based on her comment when we went out to catch her.

A couple of large buckets of hot water later, and only one hole cut into my glove when I removed Phantom's tail wrap, I had a pony with a pretty clean tail, and tannish coloured legs and butt cheeks. She wasn't squeaky white clean, but good enough for trying to use a minimal amount of water.

Her tail got blow dried and put back up into its pink unicorn duct tape and vetrap cocoon. Phantom was put into a stall to eat some hay while the rest of her continued to dry (I had used the drier on parts of her legs so she wasn't soaking, but she wasn't dry enough yet). She was quite unimpressed so that didn't last long and we went over to the arena for a hand walk instead.

I'm hoping that this will last for a few weeks, but I'm not overly optimistic. I have a feeling that I'll be scrubbing poop again for Christmas.
at December 04, 2019