Yesterday morning I wrote up yesterday's post about how much fun I have been having riding Cisco and how much braver he's been. As I was typing I thought "hope I don't jinx myself!".

So then I rode yesterday afternoon. And this happened.

My first fall off Cisco! Couldn't have made it much more graceful!

The first jump was the same size and colour that we had successfully jumped the night before. For whatever reason, Cisco hesitated at the last second (possibly because he had a monkey jumping up his neck?) and I kept going.

This was the first time that Cisco has lost his rider. I knew that this would shatter his confidence. I asked Pony Grandma to knock the poles down so that they were just resting on the base of the standards and we could walk over it if we needed to.

He was very concerned the first time. Many sideways stutter steps before he stepped over the poles, totally holding his breath. So we walked over it a few more times before approaching again at trot.

After that pole got slightly better, I thought I would try one of the same jumps from last night.

At that point I had Pony Grandma knock them all down to the ground. And Cisco leapt over all of them. With far more energy than they required. 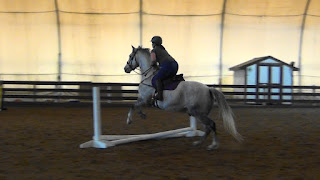 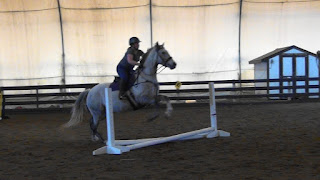 Such is training horses. One step forward, ten steps back.

Hopefully, I'll figure out how to keep my shoulders back though - I don't know if I'm lucky enough to land on my feet a second time!
at May 09, 2019