Here is a picture from Wednesday around noon. 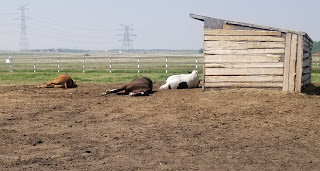 A little hazy in the heat, but it was a beautiful blue sky.

Here is a picture from Thursday around noon. 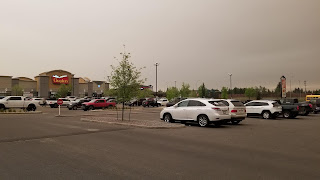 It was actually far darker than this photo shows - my phone camera automatically cleans it up.

This is closer to what it actually looked like. 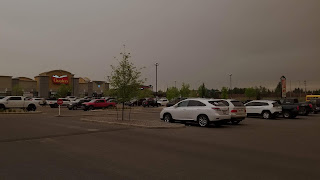 This was all due to smoke from the forest fires in the northern part of the province.

Last summer we had a couple of weeks of terrible air quality. This year isn't looking like it going to be great either - there are currently 9 out of control wildfires in the northern part of the province. I know that where I live we've only had like 2 days of rain since the snow melted so everything is super dry. The fires are only going to get worse through the summer unless the weather changes considerably.

The smokey skies changed through the day yesterday - by mid-afternoon it had changed from a dark haze to a light haze that strongly smelled of smoke and ash. Driving home the visibility was only a couple of hundred feet on the freeway (with my windows shut and recirculated air on in the car).

And the air quality health index was off the charts. 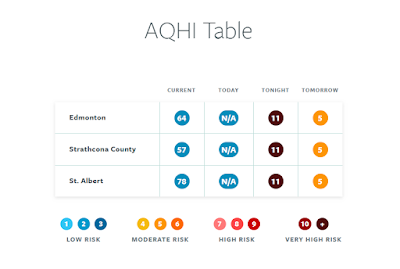 Anything over 10 is considered very high risk of problems with breathing. This chart was from around 9pm, and it got as high as 72 through the night.

We're looking a lot better so far on Friday morning. The warning is still in place, and it will probably change through the weekend depending on the wind direction.

The horses live outside full time. They don't have a way to get out of the smoke (unlike me who sat on the couch watching Netflix with all the windows shut all evening). Phantom already has known respiratory issues. This smoke is a huge concern.

Ponies will be getting little to no work while the air quaility is poor. I might tack them up and go for some walks, but that will be the max speed.

I know much of North America has been having a very wet spring. If anyone wants to bottle any of that excess rainwater up and have it shipped to us up here I'm sure we can find a way to use it!

Email ThisBlogThis!Share to TwitterShare to FacebookShare to Pinterest
Labels: weather