Well. it's been a hot minute since I've posted!

I've been working shifts that are all over the place - super early, mid-day, or late, with not much regularity to it, so I've just been too tired to type anything up. But I've been pretty good about getting onto the ponies and getting some rides in.

I did manage to write something though - I sent an email of a recent trailering practice to the ladies of the Buck Off Banter podcast. They decided that my story was wankerish enough for them and I was the featured wanker of last week's episode.

My mother had a good laugh at the story in which she was featured, although she was a little disappointed that her scabby knee was only good for a ribbon.

Here's a link to the episode!

I don't know why, but the end of September through most of October always seems to get crazy busy. Such is the case this year.

I got a few rides in last week. Nothing exciting happened.

This week isn't looking so good.

But when I get back in the saddle next week, I have some new things to use.

First - I bought a new helmet on International Helmet Awareness day a couple of weeks ago. My Troxel Intrepid schooling helmet was 5 years old so I was looking to replace it. I'd like to get a Mips helmet, but I haven't found one yet that fits me. The ones that are most likely to fit are the Charles Owen and OneK versions, but no one has them locally so that I can try them on, and in Canada, helmets are final sales, so I'm not ordering one if I haven't tried it on.

I decided on the Troxel Avalon with the Rose Gold accents. My size wasn't in stock so I had to order it but I was able to try on the plain black version. The rose gold isn't super shiny and in some lights has a bit of a copper-ish tone to it, which I'm still fine with.

While I was waiting for my horses to eat their dinner in the barn I made the adjustments to the harness and wore the helmet for a few minutes and had compliments from everyone in the barn. So I guess it was a good decision!

Also to arrive that day were my new Franklin Balls. I've been using a set of Franklin-ish balls while I walk at the beginning of my rides on occasion and have really been impressed with how well it gets my hips to open up. I'd like to work my way up to trying it at a sitting trot and canter, thus I decided to buy the real thing. 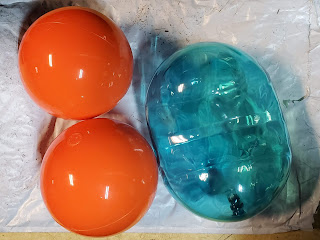 I bought the smooth ball set (the orange ones) and the mini roll (the blue peanut shaped one). These seemed to the two that were most recommended in all the videos and articles that I had read about them. I figure that the peanut shaped one will be much easier to keep under my butt at the trot and canter and I won't keep having to get off to pick up a single ball that shot out from my ass. I'll make sure I video my first attempts!

The last new thing is one that I thankfully didn't have to pay for - a new tow vehicle! I borrow my dad's truck when I want to pull the trailer (I don't want a truck as my daily driver as I drive far too much in a week and don't want to pay for all that gas I'd be using) and he decided to get a new one. His old one was fine for pulling one horse, but I didn't like how it felt when pulling two, so I only did it a couple of times for short distances on quiet roads. The new truck has plenty of power to pull the trailer when loaded up.

Thus, I now have no excuse about getting Cisco comfortable with trailering. I've taken the kids for a road trip once with the new rig so far - Cisco loaded like a rock star, but he still came off the trailer all sweaty. He didn't have sweat dripping down his legs this time, so, improvement??