I realized something over the last couple of days.

It's not that I ever disliked riding him (well, maybe once or twice). I think it's that we've developed some trust in each other under saddle, and that I know I can do different things with him and we're going to make it through to the other side.

Now that it's spring and we can do things outside, Cisco has been starting to show some bravery and sensibility about life. I mean, if we come across a bear, I'm pretty sure he's out of there, but for everyday things that we come across (flappy flags, quietly staring dogs, silently judging kitties, mini donkeys) he's been really good about continuing forward.
He's also never really done anything overly stupid so I'm starting to trust that the worst he'll likely do is stop and spin, and it will probably just be a scoot. I can usually stay on for that. He hasn't offered any airs above the ground as of yet - let's just hope it stays that way.

I've been wanting to seriously start him over some small jumps. I won't jump without someone else in the ring so it hasn't happened yet. But on Tuesday evening I rushed through tacking up so that I could ride during the last lesson of the night and hopefully piggyback popping over a couple of jumps while the group was cooling out.

Despite having not been ridden for two weeks, Cisco was quite relaxed during our warm up. The scary end wasn't scary because the overhead door was open - so now the scary end was the gawk out the giant window end.

I rushed through the warm up and had someone set a couple of jumps to itty bitty cross poles. 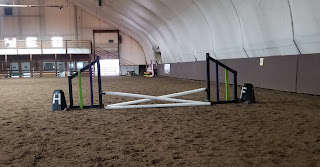 We did the one on the quarter line a few times. The first couple of times he was a little unsure. I was also a little unsure and grabbed a big chunk of mane and felt like I was all over the place. We only did it about 5 times, and he got better and better each time.

So we moved onto the cross pole on the short end, next to the open window. 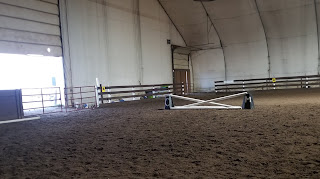 My biggest concern was that he was going to stare out the window and forget that he had feet to worry about. Also that he would see the open gate in the corner that the kids had failed to close.

But he was super! We did it 3 or 4 times, and when he started to trot forward to it I was able to get my timing and rode it mostly correctly. If correct jumping means jumping ahead of your horse that is. Yeah, I have some work to do on myself.

The last time he trotted nicely forward, I looked to the right over the jump, he landed on the correct lead, and we cantered around the corner and down the long side in a nice relaxed pace. Done!!

This was yet another ride that I was super happy with. We've got a whole heck of a lot to work on, but if I'm having fun doing it, who cares?
at May 08, 2019