It's finally time to slow down a bit. Mostly because of this: 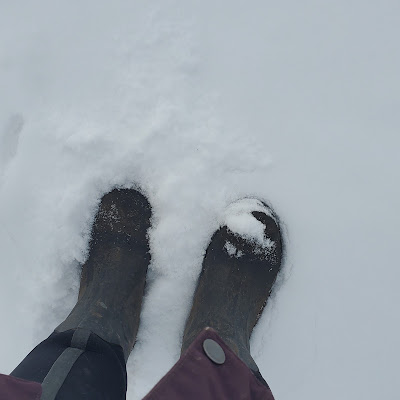 We went from one of the nicest falls we've ever had, right into the depths of winter. It's snowed three times in the last week, and in a couple of days we'll be getting stupid cold temperatures at night. The ponies are very fluffy and are bundled up in 300g of winter blankets.

They are also enjoying their mini-vacation. Although the weather was beautiful through October, the new arena didn't get started until the beginning of last month, and due to some inevitable setbacks (mostly delays in materials and windy days), it's still at least a couple of weeks from being usable. It wasn't a problem riding in the twilight in the outdoor ring right up until November 1st, but it's now covered in snow, and if the ground isn't frozen yet, it will be in the next couple of days. If the indoor is not ready by the end of the month there may be mass exits by the boarders.

I tried to ride as much as possible through October, knowing that this would happen. Cisco's respiratory issues have been better, so we got going again, generally with much more enthusiasm than I planned. His gate-boundness when in the ring by himself got better over the summer in that when I got after him he stopped flinging his shoulders in the direction of the gate at every opportunity, but he replaced it with increasing his speed when heading that way. It was super annoying. He just doesn't give up.

Phantom has been good, though she didn't get ridden that much. With it getting dark earlier, and thus colder, I wasn't up to riding a second horse most nights. When I did prioritize her, she was either very good and chill, or super sassy and looking for reasons to explode. On her last ride, she was threatening to be very silly at the trot, so I said to her, you want to trot big? Ok, I'll put you to work! and set her up to do a proper lengthened trot across the diagonal, at which point she burst into canter, and from then on could only canter or do a jiggy walk. She's not nearly fit enough to be able to do much canter and is super hairy and I didn't want to deal with a very sweaty horse so that ride got shut down quickly.

This is, of course, the first year in many years that I am able to ride at this time of year because I'm not having to work crazy hours. Now I just need a place to be able to ride to make it happen!