It poured rain at the barn on Saturday. You know how I could tell? 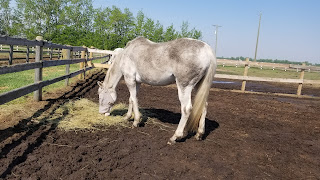 Sure, the mini-lakes everywhere gave it away too. But I was mainly judging by the cleanliness of my gray horses.

Phantom was at least covered in dry mud. So it was relatively easy to knock off. She also must have seen the forecast for the next week and realized that she is way too overdressed for the upcoming warm weather because I scraped off a whole bunch of hair. I'm back and forth about being paranoid that she has Cushings since she hasn't shed out completely and her coat looks a bit crappy, and realizing that a bunch of other horses on the property look the same so it's no big deal. I've started adding some flax seed to her dinner in the hopes that it helps.
She was a wee bit up for our ride. Which is not necessarily a good thing, as a wee bit up at the beginning of the ride usually ends up in a lot up by the end of the ride. Phantom has never figured out how to deal well with excess energy under saddle and just gets hotter and hotter through the ride, especially at the canter. Her version of being hot means shortening her neck and tightening her back, which means I don't sit as softly on her, which makes her tighten her back even more, and so the cycle goes.

We had started our canter with a trot pole exercise, where you canter towards the trot poles, come back to trot just before the poles, trot them, and then pick up canter again. Really good exercise - the trot poles make the horse rock back quickly after the downward transition and find their rhythm again.
I knew I was in trouble when Phantom took over and picked up the canter transition after the poles by herself going to the left, and on a circle to the right I felt her start to tighten her back and curl her neck. Once that starts, it tends to not get much better.

I gave her a chance though. I picked up a canter in 2 point, came around the corner, and aimed her at a 2 stride jump line of very slightly raised poles. She wasn't too bad until she saw the poles, at which point she gunned it, took off super long to the first one, thought about taking off super long to the second one and changed her mind for an awkward step instead, I tried to get her to halt at the wall at the end, she said "what wall?", then "oh, that wall", bounced to a halt while turning her shoulders, and almost popped me off the other direction.

That was enough of that nonsense.
We went back to something she hates doing - the almost walk trot. It's a very slow trot, with some energy, ridden off my seat so that she can ideally lengthen her neck. To Phantom, when she is in a silly mood, this slow trot is torturous. She just wants to go!

We did a few minutes of this trot with some lateral work and transitions added in. The trick is to try to get her to stretch forward instead of just shortening and tightening her neck. She gave me moments of it, then I tried to get her to stretch at a posting trot, which just shot her forward again, so I gave up.

This usually doesn't last for more than one ride, so I've learned to just try to ride it out for a bit, shut down the worst of it, and get off and try again next day. She's the same when loose as under saddle - when I free lunge her in the arena, once she has cantered, she only canters. No trot. I've had many occasions of thinking I'd let her quit when she trotted down the long side instead of canter, and it's never worked.