Cisco Is Part Unicorn (For Real!)

Cisco is half Andalusian. This is his daddy, Festivo SCF.

Festivo's daddy was Merlin I.

Merlin I was bred in Spain and is by the sire Estimado V. Estimado V has Carthusian bloodlines, and those horses have a couple of unusual traits.

From Wikipedia  -
"There are two additional characteristics unique to the Carthusian strain, believed to trace back to the strain's foundation stallion Esclavo. The first is warts under the tail, a trait which Esclavo passed to his offspring, and a trait which some breeders felt was necessary to prove that a horse was a member of the Esclavo bloodline. The second characteristic is the occasional presence of "horns", which are frontal bosses, possibly inherited from Asian ancestors. The physical descriptions of the bosses vary, ranging from calcium-like deposits at the temple to small horn-like protuberances near or behind the ear. However, these "horns" are not considered proof of Esclavo descent, unlike the tail warts."  (https://en.wikipedia.org/wiki/Andalusian_horse)

Yes, you read that correctly - some Andalusian's can have horns. And Cisco's grandfather, Merlin I, is one of them.
This is a picture of Merlin I showing the "horn" on his forehead. You know what a horse with a horn on it's forehead is? That's right - a unicorn.

So by my calculations, that makes Cisco one-quarter unicorn. A whole 25%.

Of course, with my luck, the only unicorn trait he will have will be pooping rainbows. Because he ate something he shouldn't have. 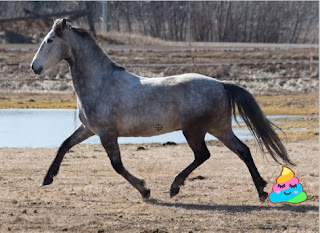 (All photos have been shamelessly taken from the breeder's websites. Except for the one of my unicorn.)