Cisco apparently has discovered the forward button.  The last couple of rides forward has not been a problem - slowing down is!

This has been (I think) because of some stimuli that has been happening when I have ridden. The first forward ride was the Best Ride Ever (So Far) of a couple of days ago where I discovered that Cisco does understand the leg aid to trot. This day we were helped by the spooky sounds that the wind was making in the arena.

The next ride we were helped by other horses. There were three other people riding and jumping when I arrived in the arena. I just did some groundwork to start until he settled a bit and they were closer to finishing.  He was better than the previous ride with other horses in only trying to stop the first time we passed the horses that were standing around. But then they all left the arena. And he had to stay.

He really wasn't too bad. He just got faster going towards the door end, and then totally bulged out that direction around that turn. Totally typical green horse stuff. Since he wanted to go fast, I wanted to go slow. And since we don't have any adjustibilty of pace at this time, that meant we mixed walk with short trots.  However I had some nice trot transitions just by squeezing my calf!

Tuesday's ride started with a jolt before I even got on. Something spooked Cisco just as we went through the door to the arena. He scooted forward and just missed jumping on my foot.  For my whole ride, he was pretty sure that something was going to jump through that door and yell "boo".

He did scoot at one time. It felt really big. But in the video it was like two strides at most. I thought he might canter and I was prepared to ride it forward, but when you look at the video it's like he decided canter was too much effort. 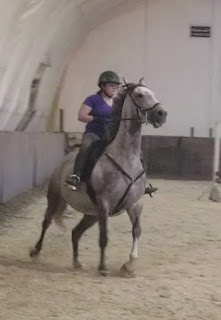 Despite this blip, there were some good moments in this ride. We had some good corners into the short end and lots of steering with very slight movements of my hands. At the end I asked for a lengthening, and then asked for a slower trot. And he gave me both.  So I left the ride there.

I let him loose in the arena because I thought he might need to get the sillies out. He didn't have any. But he was still looking for the boogeyman to run through the door. So I decided to be a crazy lady and head outside. And spent a few minutes making noise and running past the open door. We'll find out if it worked next time I ride. If need be, I will recruit Phantom to help and have her go back and forth and in and out.
at August 23, 2017