I've started to acquire the parts to make up a Wow saddle for Cisco.

I've been watching the Facebook page for used parts since October. Apparently, the parts that I need are not overly common. And if it's the right part, it's the wrong size.

So just after New Year's, I put an ISO ad up. To my surprise, I had a pretty quick response that someone had a seat that fit my requirements available.  The deal was made, money was sent, and a few days later I had in my possession a shallow seat on a flat y-bar.

Condition is fantastic - there are a couple of very small nicks on the cantle (I had to look for them). Those were the only marks I could find on it. 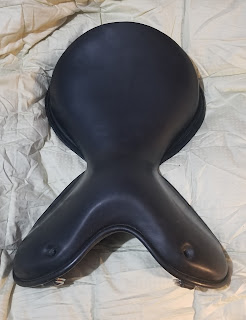 I hopefully have the acquisition of a set of panels in the works - someone from Wow contacted me from that same ISO ad. They are a little higher priced than I was hoping, but since I haven't seen many posted over the last few months, especially in my size, I will probably just grab them. They'll be about 1/3 less than new and are supposed to be in very good condition.

I'm going to need to save whatever I can since the last big part, the flaps, are going to be more expensive than I hoped/thought. Unfortunately, my short little legs are happiest in custom sized flaps, and I don't anticipate finding those used. At least, not in the near future.
I was hoping to put this saddle together for somewhere in the $2500-$3000 range. Looks like it's going to be closer to $3500. If I didn't need custom flaps, the $2500 would definitely be doable.

I have a saddle listed for sale at the moment - my beloved Crosby Centennial that I can't use on either horse. Hopefully, I can sell it in a somewhat timely manner, and I'm going to go through my garage and try to sell a whole bunch of stuff that I don't use or have in duplicate (or triplicate). There's a tack sale in March that I'll take it all to - I hate dealing with people on Facebook. With any luck, I'll have flaps for maybe May.
at January 16, 2019