Last week I received a demo Wow jumping saddle to try on Cisco.

I was immediately impressed with it.

It seems very well made. The panels, which have Flair air bags in them, were super soft and squishy. The only other time I've ridden in a saddle with air bags was many years ago when I tried a Bates saddle. It felt like I was posting off a trampoline and I hated it. This Wow saddle felt totally different - it felt like a normal saddle.

How wide is the 5U headplate that Cisco needs? 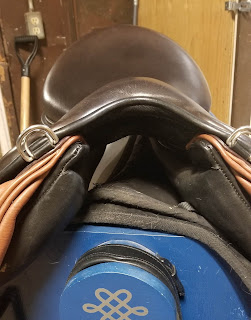 I liked that it was super wide in the front and through the gullet, made of sturdy but pliable leather, and had nice soft panels.

How did it ride?

Cisco has never been ridden in a treed saddle, so I did the smart thing and lunged him for a few minutes first. He's worn a treed saddle before (a couple of years ago), just hasn't had anyone sit on him in one. On the lunge, it was no big deal.
I haven't ridden in a treed saddle in about a year and a half. My butt immediately noticed that this wasn't my normal saddle. After about 10 minutes my butt forgave me and I stopped feeling my seat bones.

Cisco definitely noticed that this wasn't his normal saddle when we picked up the trot. Insta-giraffe. But he got over it pretty quickly.
I had to play with my stirrups a bit to get the right spot. The stirrup bar has two positions for your leathers to hang from - one forward, and one more towards the middle of the saddle. Generally, the forward one is for jumping, and the rear one for dressage. I tried them both, and yep, I agree with that.

The flap was set up so that it is tilted up at the back, which brings the front part back and makes it straighter. The shape of the flap is right for me and my super-short legs (it could still be shorter though), but the knee block isn't quite right. My knee wants to sit a bit on it instead of just behind it. So this flap, which the the Fixed Jumping flap, isn't quite right. I could probably make do with it, but it probably isn't the one I will end up with.
Considering how wide the saddle is, it didn't feel that way at all in the twist. Maybe because I also only rode with jumping length stirrups in it. For the most part, my position felt rock solid, especially sitting at a canter. Unfortunately, I wasn't able to do much 2-point. I tried a bit, and it wasn't as easy as I hoped it would be. It could be because the stirrup bars aren't in the right place for me, or because it's hard to do 2-point on a giraffe, or because I've probably done a total of 4 minutes of 2-point in the last 4 years and have zero 2-point muscles. That is a bit of a concern since I want a jumping saddle.

After he got over the initial WTF? when I picked up the trot, Cisco was pretty good in the saddle. I mean, for a giraffe. I rode in the saddle 4 times - on two of those rides I had some canter where he felt like he relaxed and took longer, slower strides. The ride in between those rides was terrible, however, and the canter felt horrible. Since he was doing the idiot dance in the barn before riding, I'm pretty sure there were extenuating circumstances, and it wasn't saddle related.
On the first ride, the saddle slid laterally. Badly. I changed the saddle pad for ride #2 to my Ecogold treeless pad, which has a non-slip bottom layer. That was much better. So for ride #3, I used a drawer liner rubbery mesh between the saddle pad and the horse. That was amazeballs. That saddle didn't move at all. Not even when I wanted it to because it was slightly to the right after I got on. I didn't even tighten my girth before cantering and didn't end up hanging off the side. I'm so sticking with it. Though I will upgrade to the well recommended Gel-Eze leg wrap that apparently many people use.

I know, it's not ideal. But I'm pretty sure anything I put on Mr. Round is going to slide.
My only other concern is if the saddle slipped forward a bit through the ride. Cisco has a big, set-back shoulder, and a wee, very forward girth groove. He currently has a Prolite girth for the forward girth groove. There were a couple of pictures where I was wondering if the point billet is angled forward later in the ride. There is still another girthing option with this saddle which would bring the front strap even more forward, but it requires an H-girth (so more $$).

Overall, I really liked the saddle, and I'm pretty sure I'm going to go this way when I'm ready to spend some money. The panels were the right shape for Cisco, so then it will come down to getting the right parts for me. I know I want a shallower seat, and probably a different flap. I'm hoping to find a used seat and panels, and then will order short flaps. But I've been watching a Facebook page from the UK where people sell parts and the parts I need aren't too common. I'm going to give myself a few months to find them before I panic and order all new.

At least that's what I keep telling myself.