I spent my Saturday looking at horse legs.

The insides of horse legs.
(Fair warning - if you are easily icked out, you might want to skip today's reading.)

My farriers hosted an Equine Limb dissection. I've seen this type of event advertised on occassion but it's almost always only open to professionals - vet students, farriers, equine body workers, etc.  They are seldom open to plain ole' horse owners.

For this event, you had to pay if you wanted to hold a knife and cut into dead flesh, but as a client of theirs, auditing was free. I'm always up for free educational opportunities!

A vet from a large sports medicine vet clinic in the province donated his time to come and talk to the group and guide us through the parts of the leg. There were also a few farriers that were in attendance - some were wielding scalpels and some were just auditing. There was a lot of knowledge in the room and everyone was willing to share their experience.

I had a friend who paid the money and got to do the slicing and dicing. I apologized in advance for breathing in her ear as I looked over her shoulder. She was fine with that. 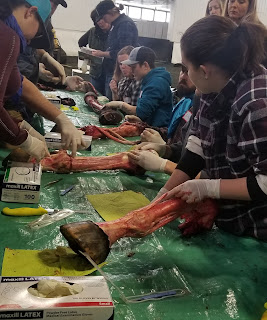 Most of the horse limbs came from a parts bin at one of the colleges in the province that offers vet tech and farrier courses. They had been waiting for this event in the freezer of one of the farriers (I guess his wife made him get a second freezer to keep horse legs in). There was one leg that came from a horse that was known to one of the farriers and at least one attendant - I'll get to that one later.

After some basic directions from the vet regarding knife safety and how to start by skinning the leg, everyone was free to start slicing. It was interesting that almost everyone took a different approach to the hoof area - I saw it cut in half, emptied from the top and picked apart in layers from the outside.

I think what this really showed us was just how little there really is that holds that big horse body up. Take off the covering of skin and hoof and you have a couple of big, thick tendons, some skinny ligaments, a rubbery digital cushion and inside of the frog, and bones. Not a whole lot more that that to support the close to a ton of weight above the legs.

Everyone had a different thing they were most interested to see, probably based on issues they've dealt with in the past. I was hoping to see a laminitic foot, but no such luck.

The piece de resistance was the leg that came from the known horse. It was from a warmblood horse who wasn't too old (somewhere between 6 and 8 I believe). I guess this horses conformation wasn't very good - his knee pointed out, his hoof pointed in, he was really over at the knee and couldn't lock it. One day he was galloping towards a fence in his field, turned last minute, and shattered his short pastern.

My farrier had seen the radiographs from the incident and they showed a spiral fracture. The horse was euthanized right away as it wasn't going to be treatable.

Everyone was curious to see what that pastern joint was going to look like when it was opened up. When they started with the leg, you could twist the hoof, so you knew something funky was definitely going on in there.

This is the result when they opened up the pastern. The white bone above is the same joint from an unbroken specimen.

Yikes, right? The bone is broken in half from the top to bottom in the image. There are loose pieces throughout - you can see that there are chunks missing from the bottom left corner. They were floating around in there. This leg was also the only one that was bloody, and there are black spots that I imagine are blood clots.

We also saw one leg that had the beginnings of arthritis in the pastern (I think it was on P2). There were just three tiny dots on the bone in the joint. It probably wouldn't have been something that would have been found or noticed at that stage, but it was pretty cool to see that.

Everyone did really well - there was no puking, and I only know of one person who got squeamish when someone crunched through the coronet band with hoof nippers. She didn't like that sound. It was cool in the arena where we were working, and the legs had been pulled out of the freezer that morning, so the smell wasn't too bad, though I was starting to smell something funky towards the end of the session. It was likely the leg that apparently was forgotten about in the shop last summer for 3 or 4 days before being placed in the freezer.

What did I learn? Mostly that it's pretty incredible how the bodies of these animals work. It's amazing how little there is to support their mass, and how there is little room for something to go wrong and not mess everything up.
If you ever get the chance to take in a dissection seminar, I totally recommend it. At the very least, you will come out with an understanding of where that area that the vet is telling you is messed up on your horse is.