No barn visit on Thursday, so nothing horsey to report. But I did manage to take a few (slightly) better pics of the owl on Wednesday! 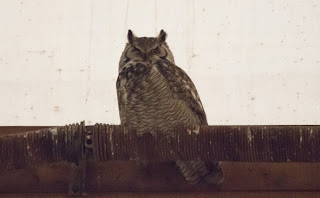 He stayed above the overhead door, so he wasn't being terribly exciting. It is dark enough in the arena, that my lens (which isn't very fast) had a hard time getting a decent picture. I used my 70mm - 300mm lens, and still had to crop to get a usable sized picture. Because of the darkness I had to have a high ISO setting, and there is quite a bit of noise in these pics. (Camera geek talk - basically, it was dark, so the pictures aren't as clear as I would have liked.) 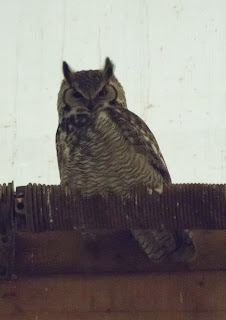 I was informed by a teenage boy that it is a Great Horned Owl (apparently they teach this stuff in school). It's obvious because of a white marking on his neck, or something like that. I just learned from Google that it is the Provincial Bird of my province of Alberta. Huh. Who knew? 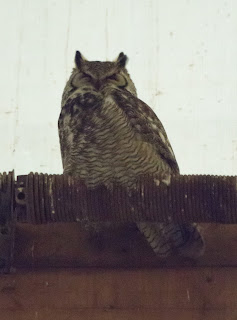 Apparently he was in and out of the arena a few times in the summer when the doors were left open. (At least it's assumed it is the same one.) He is picking off the pigeon population that we can't seem to get rid of in the arena, so he is very welcome to stay for the moment. Although the stupid pigeons don't seem to be too concerned about him - I guess one was seen standing right next to him!

Hopefully he sticks around for a bit, at least until he eliminates all of the pigeons. It's kinda cool being in the arena with him flying above your head!