Dents in his Armor

Cisco has been hard on his blankets in the first 10 months that I've owned him. This is new to me. My other horses have all been great and I have had very few blanket repairs. It probably helps that two were mares, so nobody messed with them, and the other gelding was pretty well always the dominant horse in every turnout situation.

In the past I have been happy to buy expensive blankets knowing that their chances of survival were very high. Thus I have a few Bucas blankets, and Phantom has a couple of Rambo's. They fit Cisco, but I'm not willing to put them on him if I can avoid it.

He doesn't destroy his blankets himself - they get damaged by his buddies. Cisco is a young, social, good-feeling gelding. Which means that he loves to play with other young, social, good-feeling geldings. And blankets made fantastic grab handles to pull your buddy around with. There's no way that I want to remove him from his turnout situation, so I have to find a way to lessen the inevitable damage.

Last spring he wore a Weatherbeeta rain sheet. I don't remember which version it was, but it's 1200D. He did not too bad in it, a couple of nicks, and right at the end of the season I discovered that he had torn the binding away from the fabric in the dart. Nothing major, it cost $10 to get it fixed. He wore this blanket as weather dictated for about 2 months.

I tried to keep him naked as long as possible through the summer, until the bug bites got too bad. When that happened he was dressed in his Weatherbeeta Duramesh fly sheet. I figured the textyline fabric would be durable and relatively indestructible.

I was so wrong.

I think he wore that blanket for about 6 weeks. I was patching it up weekly.

These pictures were taken on August 9th - I don't think he started wearing it until the second week of July. I took it off for good by the end of August, and it needs a bunch more repairs before the new season. I think he only wore the hood for two weeks total - it has a bunch of holes in it.

So this blanket was a fail.

When trying to figure out what he would wear for the winter, I didn't want to spend money on new blankets when I have a couple of tack boxes of old ones that will probably fit him.
I decided pretty early on that I would be best to put a Kensington fly sheet over top of his blanket in the winter. The Kensingtons are generally considered to be the toughest fly sheets on the market. I found a great deal on Amazon of all places on a Surefit version. Cisco has been wearing it over top of his blanket ever since the fall. And it's done a great job of protecting the blanket he's wearing underneath.

But - this suit of armor has suffered some damage. There are a few dents in it. 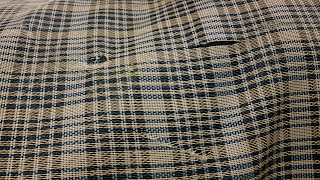 The good thing about this material is that the holes don't fray to become larger. So there are lots of little spots that are inconsequential. There is one larger slice that needs attention as soon as I am willing to leave it off for a night.

However, I don't know how long this one will last. So I have been keeping an eye on Amazon for another one at a great price. I don't want to spend $200 on it, especially since I got the last one for $127.

Sunday morning one came up, at the right size, for even less. $117. So I snapped it up. It's my second least favourite Kensington colour, Citrus Slate, but I really don't care about the colour.

As soon as the new one arrives I will swap it out and take the old one back to the armory to have it repaired. It won't be dent free, but it can be smoothed out somewhat.

Now I just need a hood to go on sale.

Updated to add:
I wrote this post up on Sunday morning. On Sunday afternoon I went out to the barn to find a hole in Cisco's armor, that went through to the blanket underneath. And another largish slice along the back dart on his butt. 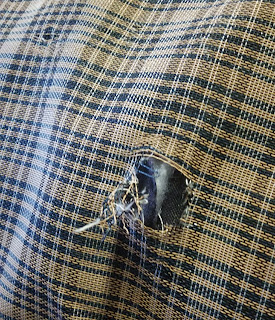 Good thing I took a patch kit out to the barn with me. I patched the bottom blanket up with the Rambo glue and a patch. He's dressed in other clothing for the night while the glue cures.

The new Kensington can't arrive soon enough! Which appears to be next Monday.

And maybe I should order a second one....