I don't know if Cisco's savior has arrived, or if he has a new nightmare.

The weather finally started to improve on New Year's Day. It slowly warmed up through the day, and is expected to continue to warm up overnight and through the next day, to just below freezing. It's going to feel like shorts and t-shirt weather after the deep freeze we've been in.

I made it out to the barn mid-afternoon. The plan for the day was to chase the kids around a bit in the arena with the hopes that they would burn off some sillies and thus I won't die when I hop on later this week. Unless I die because of the head cold I have first. (It's actually not that bad, I'm in the snotty-constantly-blowing-my-nose phase.)

When I entered the arena with Cisco I immediately noticed a bird flying across the ceiling. But it was definitely not a pigeon. It was way, way bigger. And it was kind of gliding.

Was it an owl? I've seen one out in the yard a couple of times.

It parked itself on the top of the overhead door track at the end of the arena, and I used the camera on my phone to zoom in to take a picture. Yep - it's an owl.


Then I looked up to the ceiling for the pigeons - I didn't see any! The owl has eliminated the feathered rats. Of which I quickly saw the damning evidence.

I'm pretty sure Cisco noticed the owl when we entered the arena. But because he's so quiet, and you don't hear him at all, even when he's flying, Cisco didn't seem too concerned about him. I'm not sure if Cisco will chill in there now that one of his stresses has been eliminated, or if a bird of prey will be the cause of more spookiness.

Apparently Owl has been in the arena for over a week, and he hasn't been a problem when people are riding. I know lots of people get creeped out by birds, but I am not one of them. It's kind of cool to have him flying soundlessly above me. 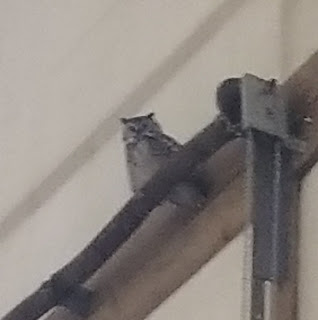 I'm sure he won't stick around for too long now that his food source has disappeared. Unless there are a whole lot of mice in there that I don't know about.

(I will take my good camera out on my next visit and hope that he hasn't cleared out yet. Hopefully I can get better pics!)