Firstly - Phantom was seemingly none the worse for her tying up incident. She was turned out on Tuesday morning, and when I arrived in the evening she was actually quite perky and walking very forward for a turtle. I gave her another gram of bute, and Pony Grandma hand walked her for 15-20 minutes (PG got a fitness tracker for Christmas and is trying to get her step count up). Phantom's hind legs were stepping up into her front hoof prints, so she wasn't looking too stiff.

I will get her started on Chaste Tree berries today (provided they are still in stock at the place that had them last week), and then give it a week to let it kick in and before starting her back under saddle - slowly.

This means that Cisco is the focus of my attention for the next couple of weeks! 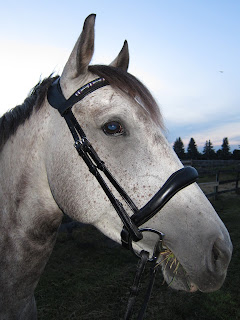 Monday night I got back on him for the first time in about 2 1/2 months. I lunged him first, he was pretty good, and then I crawled aboard. He danced around a bit at the mounting block, and took off at trot at one point when I wasn't planning it. But the main goal was a quick ride where we just tried to remember how to go, steer and stop. We managed this in about 5 minutes and I decided that was good for the day.

On Tuesday I brought Cisco in after Phantom, which is opposite to the normal routine. Pony Grandma was feeding her while I brought him in. Well, attempting to feed her, because she wouldn't eat since she still had the bute taste in her mouth. Cisco quite happily ate what Phantom did not. And then he lost his brain a little when she went out and he had to stay in.

When I lunged him, he started off pretty relaxed. The other horse in the arena left, and Cisco had a very short hissy fit. It only lasted a few strides, and was kind of cute in a he's-trying-to-be-bad-but-doesn't-really-know-how way.

Again, he wasn't very good at the mounting block, so I'll do some work on that. When he was going before he had just started to get pretty solid when I was getting on.

We stuck to just a walk again for about 15 minutes. Steering was great, most of the time I didn't have to really think about it. The halt transitions were better than the previous day, but still take more hand and a few more steps than I would like. The forward- no issue from Speedy Gonzales. And he settled in nicely and relaxed (mostly) after the first few minutes.

Next ride we'll get back to the trot.