So, that crud that I cleaned off of Phantom's leg last week, that I originally thought was scratches, but after cleaning it was thinking maybe it wasn't scratches?

I'm pretty sure it's scratches.

I hadn't been out to the barn for 3 days - two of those days where my work schedule makes it hard to get out to the barn. Hard, not impossible. When I went out Sunday evening, my fingers were crossed that I would find a relatively clean leg.

This is what I found: 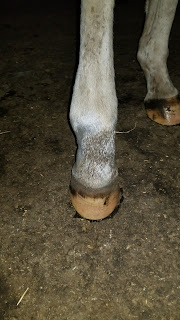 Crusty crud on the front of her pastern, fat, and sore.

I turned Phantom and Cisco out into the indoor arena to let them move around and play a bit. They both had energy, but Phantom was not at all comfortable on that leg. It was pretty hard to watch her jog tiny uneven steps. I had Pony Grandma put a halter on her and park, and then I attempted to chase Cisco for a few more minutes. Which went about as well as I expected, as he didn't want to leave Phantom. So that didn't last long.

I used some warm water to try to get some of the crud off, then dried it with a blow dryer. I had some Polysporin Triple Antibiotic in my first aid kit, so I applied that. And gave her a couple grams of bute.

Tomorrow I will pick up some more Polysporin and athlete's foot cream to mix up to slather all over it. I'm hoping I can give it a chance to improve for a few days before getting a vet involved, but if it stays that fat or gets worse I guess I'll make the call.

The only time in the past that she has had scratches was when she had alsike clover toxicity about 5 years ago. The scratches showed up first, then she had a photosensitivity reaction, which led her owner to have her liver enzymes tested. I think there was one other summer when she had a small spot come up on one heel, so we moved her to a different pasture, and it cleared up with little effort on our part.

So I am a bit concerned that this might be because of something she has ingested. And if it is, it's in the hay. There was no clover in the fields that she was in this summer. I've been trying to find out if alsike clover in hay is toxic, but haven't been able to confirm. I'm thinking I will add some milk thistle to her feed for the next bit just to be on the safe side (milk thistle is used to help repair liver damage).

Of course, this has to happen just as I am about to start working nights, 6 nights a week. So life for the next bit will consist of work, sleep, barn, sleep, and back to work. And money spent on gas and goop to slather on her foot.
at November 13, 2017