I think Phantom's leg looked a wee bit better on my Tuesday visit. It definitely didn't look any worse. When I brought her in the leg looked about the same fatness as the day before. I wanted to hand walk her for a bit, but didn't want to do it in the arena (didn't want the sand to get on her fetlock goop), and it was too cold outside for me to be happy, so we stuck to walking up and down the barn aisle.

Actually - walking and jogging. Thankfully I had put a sportsbra on before heading out, as running wasn't in my original plans for the day. I was hoping that the movement would help Phantom's leg come down a bit, and after I thought I saw a bit of progress I decided to amp it up with some trotting. She didn't sound lame like she had been on Sunday. And most importantly, I didn't take a nosedive while running in my clunky Muck Boots.

I'm pretty sure I saw improvement in the amount of fatness in her leg after the little bit of exercise she got. So that gives me a little bit of optimism that it's not real serious, and not about to turn into cellulitis.

I re-gooped her leg, fed her her beet pulp soup (too much water - oops) and popped her back out.

I had enough time before having to go home for a nap to put Cisco in the arena to run around. He had quite a bit of sass in him. When I took his halter off he squealed and leapt into the air. I had to stand in towards the corner where the gate was with the lunge whip, or he would have just run back forth along the fence by the gate, so there were some more sassy moments while he tried to figure out if he could get past me or not. Thankfully his sass didn't last too long, and he didn't get himself sweaty so it didn't take too long to cool him out.

Then I popped my current treeless saddle on him with a standard 26" girth. I have to order a new girth for the new saddle, and needed to confirm the size. It looks like the new one, which is a short flap, should need a girth that is 4" longer than the standard flap would take, so Cisco will need a 30", and Phantom a 32". There is a bit of a forward angle to the billets, and this pic was taken with the saddle just sitting on his back for a couple of minutes. So I'm pretty sure that the forward anatomic type of girth is the right option, I just have to decide which one to order. 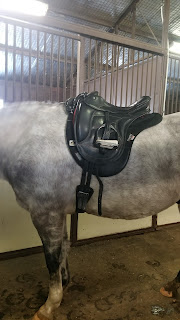