On my Monday visit I noticed that Phantom's right hind pastern seemed to have some excess crud on it. I'm pretty sure she had a minor scrape on it a week or so ago. I didn't do anything with it at the time as it was probably a day or two old when I first saw it, and it's been well below freezing out, so anything that involves water isn't fun. Phantom is well past her conformation class days, so I'm not too concerned about her gaining another blemish.

When I brought her in on Monday, it kind of looked like it had been oozing. Or something. Not bloody. Not really dirty. But something was going on. Her pastern also looked a bit thicker (not surprising, her legs will blow up due to a itty bitty scratch).

The more worrisome thing, was that it felt crusty all across the front of her pastern. Kind of like scratches. Yay. I do not want to have to deal with scratches in the winter months.

So, on my Wednesday visit, this pastern was the priority.

Here is what it looked like when I brought her in: 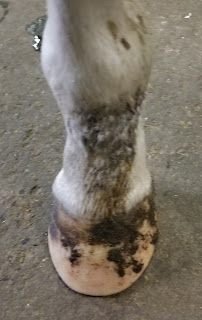 That crud on the front of the pastern was the problem. And it looked worse than it did on Monday. Now, I had put some Vetericyn on it that night, so maybe it was mainly dirt. But I had a sneaking suspicion that I was going to be treating scratches for the next while.

So I started the soaking and scraping with warm water. Phantom, as per usual, was not terribly impressed, and gave me a range of reactions from dancing around, to stomping her foot as soon as I touched it, to holding it up and out to the side. Stoic, she is not.

I had someone have a look at it when it was about half done, and she was pretty sure it was scratches. There was a couple of big crusty spots left on the inside pastern at this time. But I kept soaking, and it didn't take too long for those to come off too.

And surprisingly - everything looked good underneath. No open sores. No bare spots where the hair came off. No signs of scratches.

No idea what was going on. I am sure that there had originally been a scrape, and it got cold at that time, and wounds take much longer to heal in the cold. Phantom got super fluffy around that time, so maybe a lot of the crustiness I felt is the scabs from the scrape being embedded in the thicker hair.

I dried the area off with the blow dryer, and then sprayed Aluspray all over the area. Not sure if that was the best option or not, but it was something that would dry out. I forgot to take a picture before spraying, so here is a pic of her silver pastern after cleaning it up. 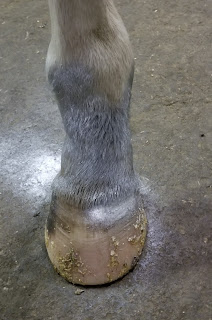 So we'll see what it looks like when I visit on Friday. Really hoping it's not scratches, or really anything else, as I start nights next week, and having to go out every day to treat wounds becomes difficult.
at November 09, 2017