I started working nights on Tuesday night. As in from late evening to early morning.  So sleep during the day is now a priority.

It takes a few days to get into a new sleep schedule so I woke up after about 4 hours of sleep on Wednesday morning, and then took another hour to convince myself that I wasn't going to back to sleep so I might as well get up. I needed to get out to the barn early enough that I could have enough time to get a nap and a couple more hours of sleep in before heading to work again.

Phantom's leg looked much better when I pulled her in from her paddock. The fatness was about half of what it had been the previous days. (Apparently there had been some hijinks out in the field earlier in the day, so maybe the extra exercise had helped to bring it down.)

I used a baby wipe to take off some of the leftover goop before applying a fresh layer. She still wasn't happy about me touching it, but didn't try to kick my head as soon as I touched it, so progress?

I squirted a bunch of Liver Flush into her mouth (which she spit on the ground) and then some bute (which squirted on me) and that was all for her. I didn't want to stick around, though it was tempting since someone was waiting for a vet to look at a hole in their horses leg that had just occurred (and probably wouldn't have if they had done things the safe way!), but no idea how long before they showed up, so I took Phantom back out.

Before leaving the barn I had loaded up a handful of treats into my pocket. I felt guilty about not giving Cisco any attention, since he was the one who walked up to me when I went out to the field. So I was going to give them some treats out in the field.

Cisco did his normal gallop to the gate when he saw Phantom coming. I let her loose and fumbled into my pocket for a cookie - and they left. With some exuberance. Sigh. So I tromped through the snow down to the far end of the paddock, holding my hand out with cookies in it.

Phantom was the first to clue in. Cisco was right behind her. I stuffed their little mouths and then tried to take a picture since their heads were so close to each other. I had to take a couple of steps back to fit them in the frame. So they would take a couple of steps forward. So I would step back. And them forward. Another picture taking fail.

Phantom was pretty sure I still had more treats in my pocket even though I said I didn't. She had her cookie begging face on, and as I walked backwards to try to get a pic of it, she kept following me. If I turned and walked away, she would stop. As soon as I faced her, she put the cute face on and got close. 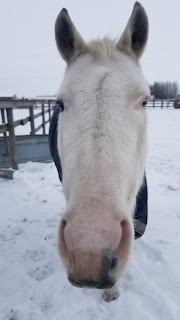 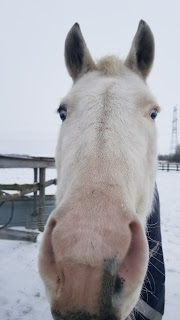