Yes, summer is over. How do I know?

Well, I saw this today: 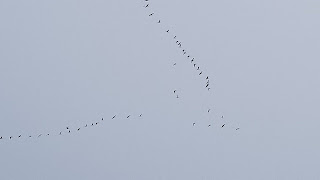 That would be a bunch of Canada Geese flying, well, not quite south, but south-ish.

Then there is this:

Yep - those are night time lows below freezing. Apparently, my phone's app is the only one that shows these temperatures, everyone else is in denial.

And yesterday, I had to do this: 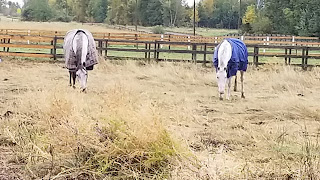 It was raining, and chilly. So both are wearing rain sheets, and Phantom's is lined.

But the main reason that I know winter is coming?

The horses have lost their brains.

After Cisco first lost his brain on Monday with his suspected Land Shark sighting, I planned on Tuesday just lunging and trying to do some quiet work in the arena. I was warned as I was bringing him in that all the horses had been silly all day. So, good luck.

I was optimistic. I had closed the big end door before heading into the arena. I tacked Cisco up with full tack and wore my riding stuff. But I also took my lunging equipment over with me. I was optimistic, not stupid.

Good thing I wasn't stupid, because I needed that lunging stuff. He remembered the horror of the previous day and was convinced that he was going to be attacked. We started at the "nice" end of the arena, then moved to the middle, and finally the far end. I could not get him to go on a decent sized circle - he fell in towards me every time he was on the side of the scary end.  Poking him in the shoulder with the butt end of the lunge whip did nothing to discourage this - the threat of the Land Shark was much scarier than I apparently am. 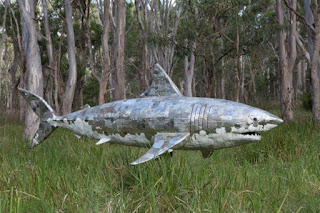 We finally started to make some progress in the scary end, and were able to trot a few small circles in a row without stopping to stare at the spot that the Land Shark was going to attack from. I was thinking that I might survive getting on him to walk him for a few minutes to cool him out.

Until it happened again.

There is a second, smaller door at the scary end of the arena that I hadn't shut. And what should suddenly become visible through the 2 feet of open space of that door? The Land Shark. AKA, the horse next door.

So all that progress we had made? Gone. Instant sweat again.

So back onto the lunge circle we went. Pony Grandma shut the door, so that helped a bit. I decided we were done when Cisco could do 3 or 4 circles at a trot without needed a tap across the butt to keep going.

His redeeming factor of the night? He stood like a rock star to get hosed off after breaking out in his brain sweat.

Remind me why I wanted a young horse. Please. I can't remember.