Each horse has their own grooming kit. Here is Cisco's. 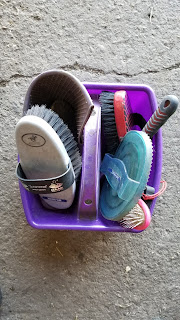 And here is Phantom's. 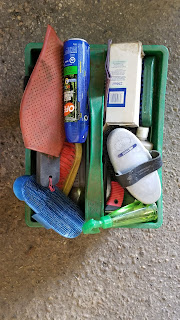 Cisco's is tiny mainly because I don't really have enough space for a larger one in my tack box. So he has the basic necessities. Curry, stiff dandy, soft dandy, body, rubber mitt, hoof pick, hair brush, and scissors.

I've been meaning to go through it and thin it out for a while. I only use like 3 of the brushes in there, and things tend to fall out as I carry it. And as much as I like having 3 hoof picks to choose from, I always seem to have to dig for one.

So here is the new and improved grooming kit. 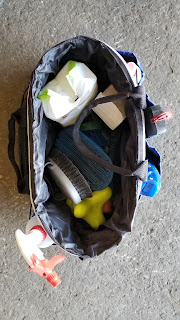 I've had this Eskadron ring bag for a couple of years and have never used it. I like that it has lots of pockets on the outside, so maybe that will make it easier to find some things like the hoof pick or scissors. I still probably have too many brushes in here - natural bristled ones for everyday use, and synthetic ones for use on muddy bits. But now there is space for a pack of baby wipes and the fly spray.

This is everything that is not going into the new and improved kit and it's all going to go home to my garage. Or in some cases, the garbage. 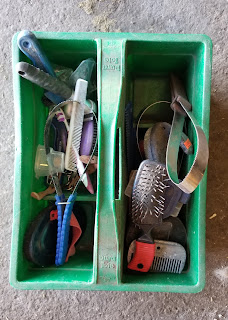 We'll see how long I last with the bag instead of the plastic caddy. I was hoping the bag would give me a bit more space in my tack box (it doesn't). I've always been a caddy user - I'm pretty sure I've had this one since I had my first pony, and she was sold in 1993.

Update - this post has been sitting for about 3 weeks so I have had a chance to get to use the new grooming bag. I really like the pockets on the outside for being able to find things quickly. The bag is quite a bit larger than I thought, so I can really jam it up with stuff, but that will make it hard to dig things out, so must refrain from that. So far I have just added a pair of bell boots. The good new is that nothing has fallen out of it like it would with my caddy. So It's a keeper (So far)!