Well, I confirmed something about Cisco tonight that I have long suspected. He's a nervous sweater.

I hadn't been out for a couple of days since we did our circus horse practice. So the plan was to let the horses run around in the arena for a bit so that I could ride sane horses tomorrow.

I took some treats and my target into the arena with Cisco to work with clicker training at the scary end. It was very still and quiet out, thus he was very quiet and quite into touching the target. He barely hesitated to follow me into the scary bits.

After we finished up with that, I chased him around for a few minutes. I literally had to chase him - he was quite chillaxed. But he had some silly canter moments and a couple of bucks. I think he might be figuring the play thing out.

He was done, it was all good. I popped into the bathroom to do my business before heading back over to the barn. While in there, I heard a couple of loud noises - I thought he picked something up and dropped it. No idea what it would be though.

I came out of the bathroom, and saw Cisco trying to escape from the arena through the gap between the gate and the wall. And I realized that he has lost his brain over something.

I yelled at him and he left the gate. And turned and stared at the scary end - which has the big overhead door open. And he makes a very loud blowing noise out his nose. A very stressed noise. This was the noise I heard while in the bathroom.

He then spent the next 4 or 5 minutes wanting to escape, blowing very loudly, and trotting very amped up tiny circles near the gate. I tried to get a halter on him at one point when he stopped - I'm too short to put a halter on a giraffe.

In the two minutes max that I had been in the bathroom, he had broken out in a major sweat. His neck and shoulders were drenched, it was dripping down his legs, and he had beads of moisture around his eyes. Very, very stressed pony.

I finally got a halter on him. But what to do? Do I remove him from the arena, and let him escape from his fears? Or do I try to make him face them, and try to get him down to the scary end, hopefully without running me over in the process?

I decided to stick it out for a bit. I wasn't optimistic that I would manage to get him down to the end of the arena, but I wanted him to relax at least a bit before letting him leave.

And then I saw the cause of all his distress. I expected it to be this: 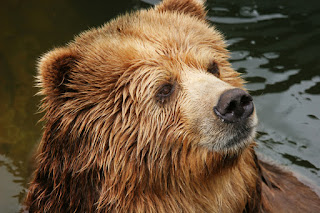 I'm pretty sure Cisco thought it was this:

What was it? This. 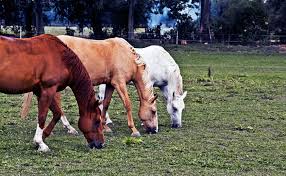 The neighbour had turned out their horses in the field that runs along the back of the arena. They weren't there when we were working down there 10 minutes earlier. It was also dusk, so it was a little harder to see them.

Well, now he was going to have to go down there.

I led him down the middle of the arena towards the open door. About two-thirds of the way down he started to realize what they were. Much stopping and staring occurred on the way down. And then the last bit, when he realized what they were, he led me to the gate to stare at them.

He didn't immediately relax, but he did settle a bit once he discovered that they weren't a horse-eating alien species. A very little bit.

I am so closing that door before riding him tomorrow.
at September 12, 2017