In Which Phantom Almost Gets Murdered

Faithful readers may have noticed that I haven't been doing too much with Phantom as of late. Mostly because it's cold, and because Cisco needs far more work. Unfortunately, it's also been because of another reason.

Over the last few weeks, there have been a few times when I've brought Phantom in from her paddock and I don't like how she is breathing. Although she was at rest when I brought her in, I can see her taking short, shallow breaths.

There have also been a few occasions of poor recovery after she's had a chance to zoom around in the arena.

It seems like it is time to take the next step in treating her for asthma.

I've figured this day was coming sooner than later. The last three or four summers I've had a hard time keeping her in work due to a cough that she seems to get starting mid-summer, although last summer she was actually pretty good (which I account to putting her on spirulina). The first summer that this happened I had her looked at and the vet said she sounded a bit heavey. We tried management changes versus putting her on a steroid.

She has always lived outside full time. In past winters she was on a round bale just through the winter, and I would pull her off for the summer when she was always at her worst. This year though she hasn't been on a round bale since last spring.

Her grain gets soaked. The arena can get a bit dusty, but I usually end up in there by myself when I ride her so it shouldn't affect her too much. 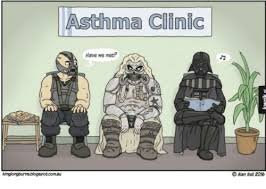 Short of soaking or steaming her hay, which is totally not feasible for 6+ months of the year up here in the frozen north, or putting her on hay cubes, I don't think that there's a whole lot more I can reasonably do management wise.

So last Thursday I had the vet out.

It was actually the experienced vet and a new intern. They both listened to her lungs, and heard something in her lower respiratory system. They also observed her using her abdominal line to breathe, which I have seen when she was doing the short breaths.

And then they tried to kill her.

They put a plastic bag over her nose and attempted to smother her.

And to add insult to injury, he listened to her lungs as she was dying.

JK. She only had to breathe 7 or 8 breaths into the bag so that he could listen. She was not even close to passing out, let alone suffocating to death.

So, yeah, there is something there.

We really should do a lung flush to determine what kind of bacteria are in there (or something like that). But for now I was given some Ventipulmin (Clenbuteral) to give her. Right now I'm going to give it to her before I ride, or if I see her having a bad day. We'll see how she does on this, and then decide if we should try an inhaler instead. I think I would be more comfortable with the inhaler and the reduced risks associated with steroid use, but then I might have to get that bronchoalveolar lavage done.

Now I just have to wait for the weather to change so that I can start legging her up again. Hopefully getting her fitter will also help her to breathe easier.