A Bunch of Nothing

I timed my visit out to the barn on Wednesday badly - horses were just getting fed their hay when I arrived. I decided to clean some of my tack instead. I keep meaning to bring it home to clean in my nice, warm living room while watching Netflix, but I keep forgetting.

I did my saddle and leather girth while standing under the heater at the barn. I dislike cleaning strapwork, so I threw that in the car to do at home. If I'm going to do it, I'm going to do it properly, which means taking it apart.

Eventually I brought Cisco in and threw him in the arena to play, this time by himself. He reverted right back to his omg! I'm going to get murdered in the scary end periscoping. He would only go about 15m down the length of the arena - thankfully this arena is about 30m wide.

To give him something to think about I set a small crosspole up at C. I've done this before with him, and he seems to enjoy it. Today was no different.
I started off really small so that he could walk over it if he needed to, then slowly made it a bit higher, and eventually a vertical. I was using jump blocks as standards, so the biggest was just over 2'. Let me say that that 2' looked a whole lot bigger than I remember!

Same as the last time that I did this with him, he often would jump, stop a few strides after landing, turn around and canter 3 or 4 strides back to the jump. I was a bit worried that once it hit 2' he might decide that it was too much work and start trying to avoid it, but he kept going. He had some crappy distances - a really long and a pretty short, but that didn't phase him and he just jumped it a bit bigger the next time.

He seemed to enjoy it and was quite proud of himself. He looks like he wants to have a pretty cute jump, but he's still trying to figure out where to put his legs. I wonder if I can get him to go through a little gymnastic.....

Phantom got to be a test dummy for one of the ladies at the barn who is going to school to learn Equine Remedial Therapy. She has to practice some equine massage and needs some victims volunteers. She had done Phantom back in the fall and asked if she could give her another massage.

Phantom looked like she wasn't really sure about someone other than her mother touching her. Last time that happened she almost died.  But she didn't die, and was very good for her pampering.

I had hoped to also let her loose in the arena, but someone showed up to ride, and by the time she was done it was -30 C out. I was ready to go home.
The ponies also got to enjoy their prize winnings from Christmas! I won a bag of Stud Muffins on a Facebook contest, and they finally arrived this week. I'm too cheap to buy the fancy treats, so they've never had a Stud Muffin before. It was no concern - they were found to be delicious! 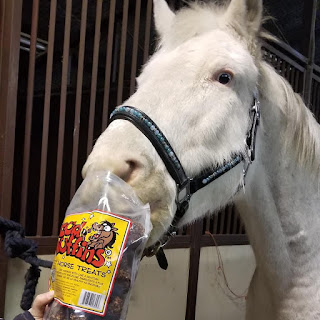 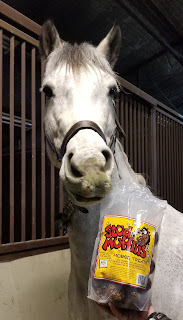 The horses have started to shed, so spring has to be coming. Right?