I Can Do Colour Again!

I've been very good so far this year about not spending unnecessary money. I mean, we're a whole six weeks into the year and I feel like I've only spent money on groceries and gas. Every time I see something shiny I think of the saddle that I want to buy and put that shiny thing out of my mind.

Late last week I sent an email to the Wow Saddle fitter to order the flaps, the last big piece of the saddle that I need. They'll take about 9 weeks to arrive, so I wanted to get the process started.

Since I'm not buying a full saddle from the fitter and I bought the seat and panels used, I don't expect to be given a saddle cover to go with my new saddle. I want a cover that has some padding to it (at least a fleecy type of lining) and most importantly, I want one that has girth pockets on it. I saw a picture of one like this a while ago and I thought that a girth holder was genius.

Originally, my plan was to get Pony Grandma to use her mad sewing skills to make one for me. We priced out the fabric and it looked like it would cost in the range of $45-50 worth of materials.

Then I went home and did the Google search and found exactly what I wanted by Lemieux. I could get it for about $45 on Ebay using a coupon code valid until the end of February. I decided I would go this route.

I shopped around at a few UK websites to see if I could find it for a better deal. And I did - in brown. I'm not overly picky about colour, and I like brown - it will match my paddock boots, half chaps, and One K helmet. 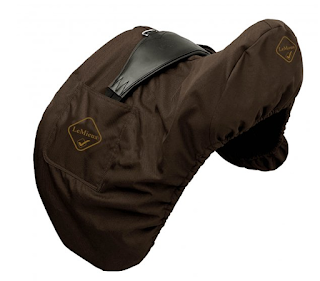 Of course, if you are ordering from overseas and have to pay a bunch for shipping, you might as well make it worth your while, right?

Like almost every rider, I own a bunch of saddle pads. However, in the last 4 or 5 years, I've only used 3 of them. For the last two years, I've been exclusively riding in my treeless saddle. It requires specialty saddle pads, which are in the range of $200 each. I have one for each horse - one is black, the other is black with some navy trim. Before that, I had some saddle fit issues with Phantom, and once she decided that she liked my sheepskin lined square pad I wasn't changing it. That saddle pad is also black.

I'm kind of sick of black.

Otherwise I don't think I have bought a saddle pad in probably 7 or 8 years. Of the ones that I have, I wouldn't say that I really love any of them.

I've loved the look of the Lemieux saddle pad for the last couple of years. So many pretty colours to choose. I'm very partial to jewel tones. 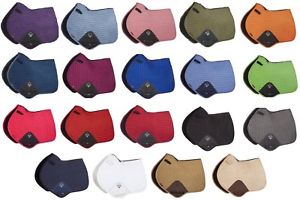 Black currant is a limited edition colour that should be shortly making it's way across the pond to me. 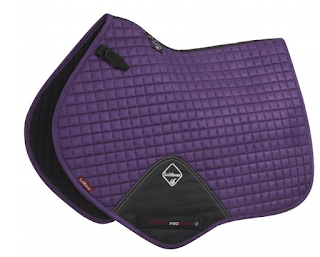 It will go nicely with Cisco's browband. 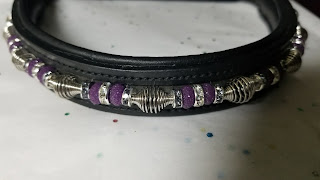 Benetton blue will likely be my next colour. I don't like royal blue, but this colour is striking on a horse.

I might be convinced to go black again, should this saddle pad from Equestrian Stockholm come on sale. I promise that I won't do the whole matchy-matchy thing - mostly because I hate using polos. If I have a shirt that matches though........