Day 46 of the Arctic Expedition

The crew is getting restless. I fear that they might resort to cannibalism if the weather doesn't change shortly.

Well, probably not cannibalism. The ponies are getting enough hay to keep them happy - Phantom seems to have put some weight on. I'm okay with that since she was at about the perfect weight and I didn't want to see her lose any more.

But omg - it feels like this cold is not going to end. We've had 10 days in a row of waking up to temperatures near -30 (generally colder than -30 with the windchill), and we've only broken the -20 temperature once. It got to a whole -18 on Thursday. Whoopee.

And it doesn't look like it's going to be much better for the rest of February.

Sure, it might start to get a bit warmer in about 11 days. A daytime high of -15 means that it's probably a solid -18 by the time I get home from work and would be on my way out to the barn. Plus it's usually 3 or 4 degrees colder at the barn than it is in the city. So I still won't be riding.

Not that this forecast will stand - it will completely change by the time the second week comes around. Probably not for the better.

So it will mean more play dates for the kids. Which is what they got on Sunday.

I was a bit tight for time, so Cisco had to get turned out in the arena with Phantom. Phantom is not nearly as fun as Blue. Big sisters find their little brothers annoying and have no inclination to put up with their attempts to get a rousing game of bitey face going.


Phantom is actually far too nice to him. At one point she gave him a super polite warning by lifting up a hind leg in slow motion.

Like any big sister, there are times that she wants to get away from her sibling and just be by herself.

They actually get along very well. 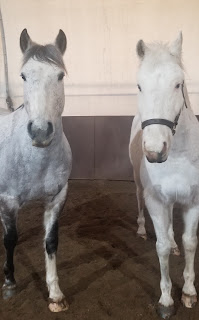 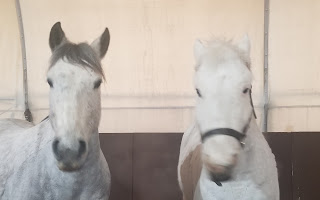