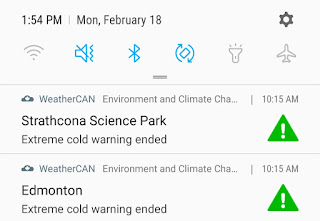 Monday was the first day in about 2 1/2 weeks that we did not have an extreme cold warning in effect. I mean, it's still cold, just not extremely cold.

Still too cold to ride that night though.

I zipped out in the evening to put Cisco's hood back on. The hood that he had been turned out with when I was out on Wednesday, but had disappeared by Sunday.

It was found in his field. I didn't see any new damage to it, but the holes I had patched with a new adhesive last week got reopened. So I decided to take it to Pony Grandma and get her to fix it all up.

I later discovered that he did break it.

There should be two Velcro straps there! Not one!

Hopefully I can find it during the day on Tuesday or Wednesday when I'm out and we can get it reattached. I can't make it too easy for his neighbours over the fence to remove it.

I put Phantom and Cisco in the arena together to have some play time in the hopes I would be able to hop on on Tuesday. They did their normal routine - Cisco tries to get Phantom to play by biting her on the bum, she puts up with it for a while then gets pissed off and yells at him, he looks chagrined for about 2.4 seconds before biting her bum again. Like when you and your little brother are in the back seat of the car and he keeps poking you while you try to ignore him. So annoying.

When I let them loose I kind of missed something - I forgot to make sure all the gates were shut. I started to check them all, but got distracted by something and forgot to check the large gate in the far corner of the arena. I usually have to beat Phantom to the gates because she will check every one of them to see if it's her lucky day and I missed one and she gets to go exploring. Again.

(On a side note - she fits through the glass human doors. I didn't think she would, but she knew she was good.)

So on this night, sure enough, Phantom realized the gate was open at about the same time I did. I was halfway down the arena at this point, so she was easily able to escape.

Cisco was following her but stopped dead at the gate with a look of panic on his face. I swear he looked back at me like "Mom! Mom! Phantom's going where she's not allowed to go!"

Of course, by the time I got to the gate he had decided to follow his sister. I quickly looked down at the opposite end to check on the glass doors - still closed. I wasn't too panicked that they could get into too much trouble, especially after they tried to go across a section that has some big gravel in it that didn't feel good under their toes. They turned around and came back towards the opening that they had escaped through.

Eventually, I got them both back into the fenced in part of the arena. Phantom had to try her luck with the gate once more. By this time I got smart and made sure they were all securely latched shut. 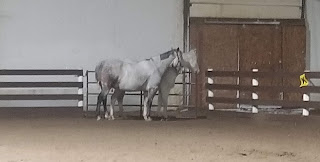 Phantom has a thing about opening gates (and doors) herself. When she was at her previous owner's place, the paddock that had the automatic waterer in it had a skinny gate into it. The gate would be left open and unlocked, but sometimes it would swing shut. The horses all learned to push the gate open when they wanted to go into the paddock with the waterer. So now Phantom loves to push open gates and doors herself. It's a bit of a problem when trying to open gates while mounted as she insists that she should be the one to do it. Usually, I just try to get the clip off and let her push it open. That doesn't work in Working Equitation, so I guess I'll have to work on getting her to let me open the gate!