When I arrived at the barn on Monday, Cisco was enjoying a nap in the sun. 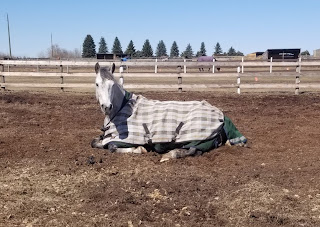 Neither of the ponies has been ridden in the last week. So there wasn't specific goals for today, other than getting them doing something under saddle.

I've done at least one thing right in training Cisco - he stands great at the mounting block. Actually, I've done two things right. He also knows that walking is chill time. At the beginning of the ride he walked around on a mostly loose rein.

Of course, the downside to walking around all chill-like, is that they sucker you into thinking that they'll have no energy when you ask them to go faster than a walk.

Our trot was very zoomy.

Zoomy trot, by itself, isn't much of a problem. Zoomy trot with drunken steering is a bit more annoying. After I had to steer into a jump standard to stop him I decided I was going to fix the problem.

As I saw it, there were actually two problems. The first - the rocket launch transition from walk to trot. He started with way too much enthusiasm. The second - we don't really have any adjustability in our trot. We mostly have one speed. What speed it is depends on the day.

We started doing a whole bunch of walk trot walk transitions. If he used the rocket boosters through the transition, it was right back to walk and start again. We progressed to staying at a decent pace for the first few strides before the booster power kicked in and having to do another walk transition.

And then it happened - I closed my thighs, said walk, and he slowed his trot down. I gave with the reins and gave a cluck and he stayed at a slow trot. Once we got it, we could keep getting it. The beginnings of a half halt!

That was progress. So I decided to end the indoor portion of our ride and head outside. It's pretty sad that this was our first ride outside, but I didn't get many rides in last summer before the winter that never ended arrived. We just did a short walk down the driveway, and he was very good. Very looky, but not reacty.

Phantom came in to the barn in a crabby mood. She wasn't happy to be touched. Anywhere. Total Miss Crabbypants. I'm wondering if she is in heat.

Too bad. I was riding.

This was the first ride since her vaccinations a week ago. The lump on her boob is mostly gone, but it's hard, so she's obviously not back to normal. My goal for the ride was to just get her moving around a bit and see how she felt.

The first few strides of walk she definitely felt off on the left front. But then it disappeared and didn't come back when we trotted. She still wasn't quite right to the left - not wanting to bend. So again I took advantage of the nice weather and headed out for a walk outside.

I took three bridles home and cleaned them while watching British comedy shows on Youtube. I finally cracked open and used the container of Stubben glycerine soap I bought ages ago - man, that's great stuff. I haven't used proper glycerine soap in years but I think I'll be going back to it. My bridles looked great, felt great, and that soap smelled wonderful. Lovely saddle soap smell. Perfume for equestrians.