I've only been managing to ride one horse in the evenings. Mostly due to the amount of time I have to spend scraping hair off the furry beasts.

Saturday night was Phantom's turn to go for a spin. She hasn't been ridden since she had her mild tying up episode on Monday, so this ride was mostly a status check.
She felt nice and forward at a walk to start the ride. Trot started off a bit shuffly but it didn't take too long before she was trotting with some energy. Too much energy. But she felt good.

So I was surprised when I saw the symmetry that the Equisense showed. The overall score was only 7.1, and the scores through the ride were all over the place. At first, I thought that the scores were lower on the left rein than the right rein, so I did two laps in each direction at the end of the ride. And that theory proved to be false. 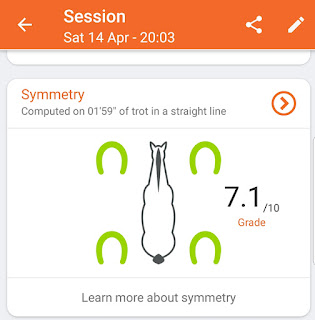 And because I like to overthink things, based on the graph above, I wonder if there is some residual muscle soreness, and she starts off the trots feeling good and as she trots she starts getting sore.

I didn't have plans to do more than walk trot for this ride, so I finished up on those last trot laps.

Now that the days are getting longer, and despite the non-ending cold, the sun is out. And ponies with pink skin around their eyes find that those eyes are getting irritated.
Thus it's sunglass season for Phantom. She'll wear a fly mask from now until September, except on some days in the spring when the weather is going to be crap. In the summer she prefers a Cashel mask (long nose, no ears) - that is the only kind that she'll keep on for more than a day. In the spring I'm not as worried about her nose burning, so I'll usually use a Farnam Supermask. And I'll have to tell people why my horse is wearing a fly mask when there is still snow on the ground.

Of course I forgot to bring one from home. I had an old Supermask in my tack trunk, but it was partially shredded under the jaw, so I didn't really want to use it. I remembered that I had the fly mask that came with Cisco's Weatherbeeta Duramesh fly sheet in my mobile tack room car, so I grabbed that one.

Phantom is usually really good about her fly mask being put on - I usually carry it when I take her out, take her halter off inside the gate and then put the mask on. At the beginning of the season she's a bit silly about me putting it on (head up a little bit, drunk walk once it's on), but by the time summer comes around she seems to know that it keeps the bugs and sun off her face and appreciates it.

Since it's the first time this year that she's worn a mask, and the Weatherbeeta mask was unknown as to fit, I figured I would put in on in the barn. So I lifted the mask up to her face just like I do every time in the summer, and she put her head up in the air, backed up, and said, "nope nope nope". I reorganized and tried again. Head way up, backed up more, and a definite "nope nope nope". Grrrr.

Fine. I didn't want to fight about it. I grabbed the crappy Supermask, and a couple of treats just to be safe. I walked up to her, lifted that fly mask the exact same way I had the Weatherbeeta one, and popped it right onto her head.

Apparently, opinionated princess ponies don't appreciate lime green. Yet again she was only too happy to tell me her opinion. Silly mare.