More About the Boobage

I arrived at the barn in the afternoon and went out to get her. She was parked in front of the round bale, and was not happy to be pulled away from it. We walked very slowly back into the barn, kind of hobbling over her left front.

Her boob seemed a bit bigger than the day before. A solid E cup. 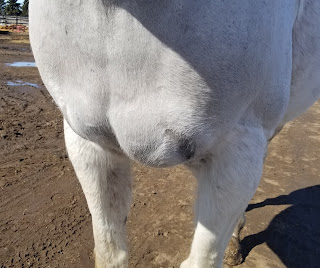 I put an ice pack on it and rigged up a couple of stable bandages to hold it in place.

I decided to hand walk her for a bit to get her moving around. I know it's just muscle pain, and some gentle exercise will likely help her work it out a bit better. She was moving so slowly, and seemed so sore, that I was doubting that walking would be the right decision. Until I brought out her food dish - suddenly she was perfectly capable of walking quickly towards her dinner!

Her temperature was back down in the normal range, at 37.8. Higher than normal, but not high enough to stress about. 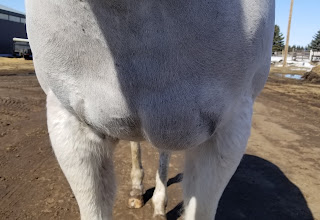 I also debated about whether I should turn her back out into her paddock with her buddies or into an individual pen for the night. In the end I decided to leave her where she normally lives. She gets along very well with her friends, so I'm not worried about her having to move out of the way quickly. She will move around out there more than she would in a small pen (unless she got really pissy because she was cooped up). My only concern is whether she would walk across the field to take a drink from the water trough - a justified concern since the two times that I brought her in on Wednesday she had to stop for a drink on the way in.

On Thursday I had to go out to the barn in the morning since I had the late shift at work.

Phantom walked into the barn a bit better than she had the day before. Her breast implant is leaking so gravity is pulling the fluid down, and she now has a bit of a saggy boob.
I threw the ice pack on it again and shared a muffin with her while we waited for the cold to work its magic. (She would have very much preferred not to share. Apple muffins from Costco are delicious.) We then walked up and down the driveway a couple of times before heading back out to the field. She walked very forward back to her field.

She may have been happier to walk back out because I was finally able to turn her out naked. Spring has finally arrived!