This week is attempt # 42 at trying to get Cisco going consistently so that he gets broke before he's 20.

He lunged very quietly in the scary end to start with. Then stood super well while I got on (at least I've gotten that part right).

He was really good about walking at the scary end, probably because there were a couple of other people riding and they were also down there. He was highly suspicious of that area, but kept his brain in his head. 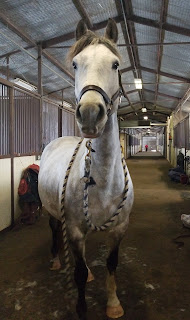 Other than the few bits of spooking that he's done (which really hasn't been all that much now that I think of it, just lots of looking and holding his breath), he really hasn't done anything naughty. But I have a feeling something might be coming.

There was a moment in this ride as we were walking when he had a little hop behind. It was one stride, with one leg, but definitely felt like it had upward movement to it rather than a trip. Not sure why or what to think of it.

Just after we started trotting, he slammed on the brakes when I was mean and made him trot away from where the other horses were. A couple of whacks with the crop and he was on his way again.
This happened a couple of other times as well. Trot trot trot urp stop. Tap tap and off we go again.

I think it's just a phase of seeing what he can get away with. He hasn't overreacted at all to the crop - yet. But it won't surprise me if it happens.

I might play with bits during my week of vacation and see if he gets a bit less fussy with his mouth. I think I've tried all the ones I currently have so I'm not optimistic that he'll suddenly like one he didn't like before. He's currently in a low-port Myler - I'm open to ideas on what to try next. Single joints he put his tongue over, lozenge bits (NS Verbindend, NS Tranz-Angled Baucher, HS Dynamic KK) he rooted down, both of these types he got an overly wet mouth which led me to think that he didn't think he could swallow and move his tongue. He doesn't do any of this with the Myler, but is just unsteady with his head, which I think is more due to being a bit nervous. I'd like to try a Sprenger Duo and a NS Turtle Top bit, but I don't have the $300-$400 to try a couple of bits that I have no idea as to if they would work. Not many options for bit rental here either. So no idea where to go next.