One of my wants needs that I picked up on Black Friday was a new black bridle for Cisco. I have many brown bridles from my years of hunter/jumpers, and actually prefer brown leather. But I seem to be going more the dressage route these days, and have a black saddle coming for Cisco. So he obviously needs a black bridle to match.

The Solo Equine bridles have popped up many times in my Facebook feed over the last few months. Their products are flashy, and have been getting good reviews. Plus they are local to me - gotta support horse people in my area! So, when they announced a Black Friday sale of 30% off, I decided to throw some money their way.

I didn't have a hard time selecting a bridle - because they only had one model in Cob size. The Solo Sigma. Thankfully it was a model I quite liked so I was okay with ordering it. (When they started up last spring they only offered everything in full and oversized, but I'm pretty sure I saw a post that going forward all new models would be also offered in cob size.) The regular price was $175, sale price $125.

I ordered it in the wee hours of Friday morning, and it was sold out by mid-morning. Good thing I jumped on it early!

Since it's local to me, I received it the next business day.

Initial thoughts - it felt good. Not stiff. Thick leather. And I loved the blingy browband. Not overly bling, but a nice subtle pattern.

It's also skinny, which I don't mind.

It has a monocrown. The ears are cut back, but the padding is not. 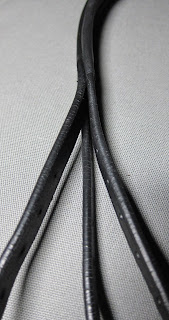 The strap for the noseband is the bottom layer of the monocrown. It comes out from the padded part.

One concern I had before trying it on was that it looked small. The cheekpieces are shorter than other cob sized bridles I have.
Many years ago, I had read that a way to judge quality of leather was to flex it backwards (towards the finished side) and see how it wrinkles. The better the quality, the less it should wrinkle.
The bridle came with plain, flat reins with stitched on running martingale tabs. Not my favourite reins, but I seldom use the reins that came with the bridle. Maybe I'll take them in one day and have hand tabs stitched on them.


Most importantly - how does it work on the horse? (Excuse the horse pics - they were all taken in a rush on a fuzzy, ungroomed pony.) 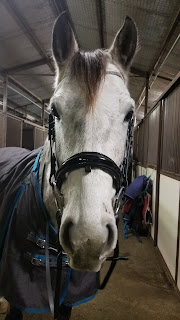 It looks good. I love the thick, patent noseband. The browband kind of disappears behind Cisco's thick forelock (and fuzzy forehead).

I am undecided on the fit. 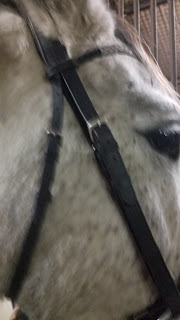 The buckles all line up near his eye, as they should. The noseband strap kind of disappears behind the cheekpiece. But there are only a couple of holes left on the cheekpiece. Cisco is currently wearing a Myler D-ring with a massive D. When he (hopefully) goes in something with a smaller ring I will have to drop it down another hole. 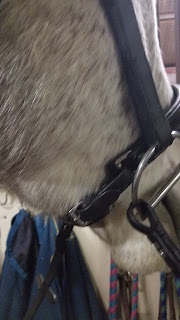 I can only get the patent noseband done up on the very first hole. This noseband wouldn't fit Phantom, who is thicker through her nose. It might relax over the next bit and be able to get to the second hole, as it is not cranked. 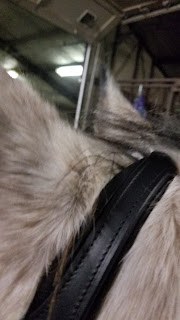 No issues with the crownpiece. 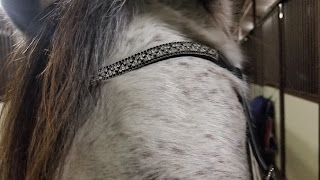 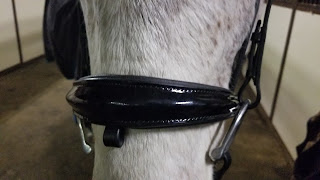 Despite my concern over the fit, I am going to keep it. It doesn't fit him badly, it just doesn't have much room for adjustment based on the way it is currently fit. Since their next size up is full/warmblood, I would think that it would be huge on Cisco.

The quality seems okay.  I didn't pay $400 for it, so I can't expect the quality of a $400 bridle. I paid more than twice as much for my PS of Sweden bridle, and I think this one might be on par with it (except for the PS of Sweden reins - which I love!).

I will give an update once I can actually use it for riding in a couple of months and it has had some use. In the meantime, I will just look at my reflection in the patent noseband and smile.
at December 01, 2017