I ordered new paddock boots from Germany on September 26th. They arrived on October 4th. And that was the slow shipping option! I chose the slower option because it was slightly cheaper (not much really, but mostly because it sends the package through the postal service when it reaches Canada. This means it is definitely slower than the other option of a courier, but it most importantly means that the chance of getting dinged and having to pay customs and duties on the shipment are significantly less. Sure enough, it paid off, and there were no extra fees that had to be paid when the postman dropped off the parcel. Score! 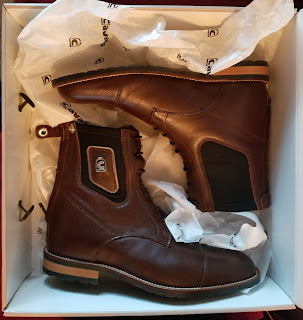 I ordered a pair of Cavallo Paddock Sport boots in dark brown. They are a lovely, rich shade of brown. Not a perfect match for either my old Grand Prix half chaps or my newer ProChaps, but no complaints. Cavallo makes matching half chaps for their boots, so if you needed a matched set you might have to go that way.

When I first pulled them out of the box my heart sunk - they looked like they were going to be much too long. They are a little bit longer than my Ariat's that they're replacing, maybe a half inch or so. When I put them on though, they didn't feel too bad. 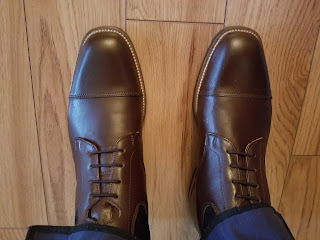 I have slightly wide toes. Because of the shape of the toebox, I think that if I went down a size they would be too small. The outside toe area cuts in much more than the Ariat's do. I could afford to lose a touch off the length, but couldn't afford to lose any width. I ordered the UK5's, which are a European size 38.

Because they have zippers down the back, and the laces are a fixed elastic lace, they have a much slimmer fit around the ankle than my Ariat's. Which means that they kind of look like clown shoes to me. I mean, I kind of have big feet - I generally wear a 7.5, which isn't really that big, but then I'm only 5 feet tall. That's a solid 1.5 - 2 sizes bigger than almost every other vertically challenged person I know. These wouldn't be the first pair of clown shoes that I've owned. 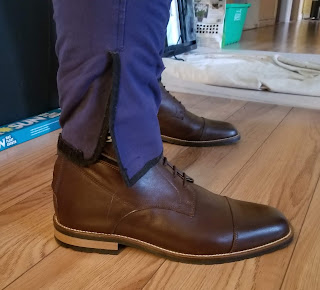 They felt quite comfortable right off the bat. At the barn I only wore them through my ride on Cisco. The inner liner on the footbed felt nice and squishy, even when I put my foot in the stirrup. I didn't have any rubbing due to the zipper, but I only wore them for about an hour. 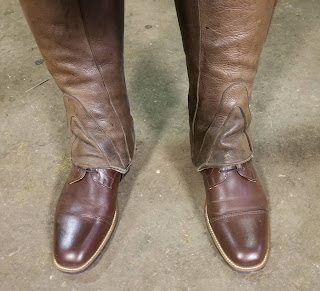 The left boot was a bit too tight, and the right one was a bit loose. I'm not sure if my feet are that differently sized, or if the boots are slightly different. I tightened the lace on the right one a bit, and I'm pretty sure that the left one will loosen up in a few rides. I couldn't feel my feet in the stirrups very well, but that should go away after they've been worn a bit. 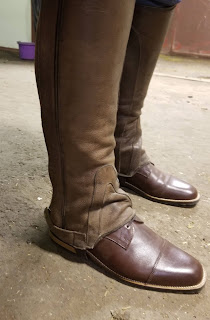 Initial impression? I'm quite happy with them. They are comfortable and seem to be of good quality. I'm okay with the fit - if I went down a size I don't think I could get winter socks in them, but they might end up slightly big in the long run. I might have to use the bathtub method in the spring to fix that if it turns into a problem.

The boots, with shipping, came to about $236 CDN. I also added some Haas brushes to the shipment, which came to about another $30.