I have two horses. 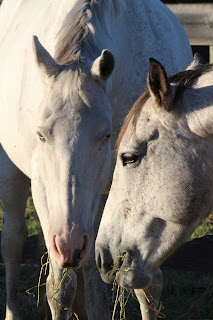 And they are both lame.

Well, I think more foot sore. At least, I hope that's what it is.

We've had a bunch of rain (and snow) for about the last 3 weeks. Daytime temperatures have been just above freezing, so the ground has been very slow to dry out. Thus, they've been standing in some mud for much of the last few weeks. Not ankle deep or anything, just enough that their soles have been in contact with damp ground.

It has been below freezing at night, so the ground might be a bit crusty in the mornings. Not totally frozen yet.

Both horses came into the barn on Monday night seemingly a bit owie on the hard ground or gravel. In the arena they were inconsistently off, but were definitely off in a couple of spots where the footing is a bit more compacted. Cisco had a hind leg that was a bit thick above a fetlock, but it came down a bit after he was handwalked. He didn't react to me squishing the tendons and ligaments around, so I don't think that it's a major problem.

Phantom was far more lame at moments than Cisco, but since she's a drama queen that is totally expected.

My thought is that their soles are soft, and maybe bruised. Phantom wears shoes but has always been sensitive to hard/rough ground. Cisco is barefoot and his soles are a bit on the flat side, so it wouldn't be a shock if he picked up a bruise. Thus both horses got their soles Keratex'd, and Cisco got a gram of bute since he also had the fat leg.

The pens have started to dry out, and there isn't any more moisture in the forecast for the next couple of weeks. Hopefully I am right and their feet can start to dry out and harden up again and that solves all my problems. Well, probably not all of them.