Last week I had a bunch of prep to do for this sale that I was going to. (I did okay, but didn't sell as much as I hoped or had done in previous years.) Monday last week was Thanksgiving up here in Canada, so I had to do the family thing. During which I cracked my nose against the skull of a toddler (I bent down as he popped up), so I had a headache centered in the middle of my face for the rest of the week.

The ponies got ignored for the whole week until the weekend. On Saturday night I made it out to give them a chance to run off some sillies in the arena as I hoped to ride them both on Sunday morning.

The arena is being rented again by a local 4H group every second Sunday morning, as it was last winter. But this winter they seem to be a bit more organized, and busier. We are able to ride while they are there, but it looks like the late morning groups might be doing consistent jump lessons, so it might get a little hairy.

This week I was out early enough to ride the first horse during the earlier lessons, which are more beginner, so I was hoping it would be quieter and thus I tacked up Cisco. I actually timed it perfectly to arrive in the arena as the group was on a bit of a break and I had to share the arena with only one other person. Which was great because Cisco was a wee bit up.

There was just so much to look at - there was probably 15 unknown horses tied up at the hitching rail. Occasionally kids ran across the gravel along the bleacher side. Jumps were being set up.

When I got on him, he felt a bit light on his feet. Not the normal feeling. As we passed the horses all tied up at the far end, his back feet felt even lighter. I hopped off and attached a lunge line.

He wasn't overly silly on the lunge, just more forward than normal. And immediately sweaty.

I hopped again with the thought that I might just walk and cool him out. But I decided to throw in some trot and see what happened. And he was actually pretty good, and was trying to do what I wanted him to do, although he was still easily distracted when we rode past the horses that were tied up.

Eventually, the kids started to get tacked up so I ended the ride. It ended up much better than I thought it was going to be when I first hopped on, so I called that a win.

The plan was to take him back to the barn, dry him off, feed him, chuck him back out and grab Phantom for a quick ride. Unfortunately, it didn't go that way.

Cisco choked on his food. Again.

There were no carrots this time - only pellets and beet pulp. So I guess I can't totally blame the carrots from last week. The beet pulp was soaked, but it was from the top of the bucket so it was far more fluffy than soupy.

It was exactly the same as the previous week - he stopped eating just one mouthful short of licking up the remnants, and then he started looking like he was going to vomit.

I squirted a couple of large syringes of water down his throat. I don't know if it helped or not. It seemed to be slightly worse than the previous week, and he might have been a bit more stressed, but otherwise, it was exactly the same. I left him in a stall for a bit, so I'm not sure if he got sweaty because of the stress of choking or being in a stall.

Again, it passed in a little less than an hour without me having to involve a vet.

So now the question is why? Is he eating too fast? Is there some scar tissue in his esophagus from previous incidents? Or maybe just some irritation from the last time? And how often does this happen when I'm not around to see it?

For now, he's getting soup when he gets his grain (beet pulp and a ration balancer pelleted feed). He wasn't overly impressed with his soup the first time I gave it to him, but he slowly slurped it up. His hay is in a slow feeder net, which I patched up (Cisco and his roommates were not happy that I fixed the hole and they could no longer get their whole nose inside to chow down) so he eats his hay pretty slowly. 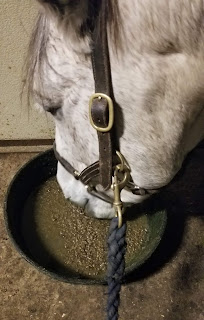 I'll keep him on his soup diet for probably a month or so before trying his regular food again. Maybe he'll lose weight?  Ha ha ha.