WHY IS THIS STILL HAPPENING????? 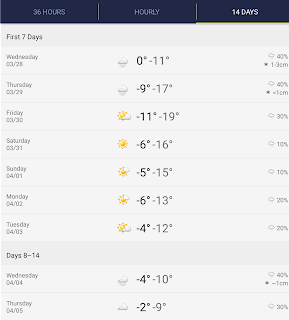 This winter is never going to end.

The snow and wind that blew in Monday night weren't in the forecast that morning. It wasn't even really expected through the evening - 40% chance when I got home from work.  Yet the wind picked up, the sky clouded over, and by the time I got to the barn the occasional snowflake was drifting past my windshield. (It snowed most of Monday night, and I drove to work on Tuesday afternoon in a snowstorm.)

I brought Cisco in to tack up, and when I opened the overhead door to head over to the arena, little balls of fresh snow rolled under the door. Great.
The worst part was that the new snow covered all the frozen and unfrozen areas of the yard, and you couldn't tell what was solid and what was liquid until you stepped in it. Hence I had wet feet by the time I got into the arena.

One of the joys of the first spring in a new place is finding out what happens with the thaw. And yay - the arena gets flooded. There was a big chunk of one corner that I had to avoid. Pretty sure that there will be some re-grading done this summer.

The wind was blowing, so there were scary sounds at the end of the arena. I lunged Cisco down there, and he wasn't too bad, but definitely not relaxed. There were jumps set up that I had to work around, so I didn't have as much space as I would have liked, so I didn't spend too much time lunging. I decided to just suck it up and get on, and just deal with whatever horse I had.
It took some effort to get on however. Mostly because I was laughing. Cisco loves his neck and withers scratched. Loves it. When I get on I grab a chunk of mane with my left hand. I guess that pulling on his mane felt kind of good. He kept lifting his head and neck up and down, up and down. When I released his mane, he stopped. I grabbed mane again, and he started up and down with his head again. Twit. I finally had Pony Grandma stand at his head so that I could get on.

I put him back in the Micklem bridle in the hopes that he would be less fussy. Nope. Maybe a wee bit, but not much. I really think it's mostly nerves, whether it be feel good nerves or worried nerves. He got a bit better after trotting for a few minutes straight, and then got worse again.

I think that he definitely understands steering from my leg at a trot. At one point we were on a large circle to the left, and his butt was swung one way and his head the other. I put my inside leg on, and he actually bent around it. Huh. Then there was the corner by the gate that he had totally fallen out at the first two times on our figure 8 pattern. So the next time I was determined to fix it, and used mostly outside leg to give him a barrier. And it was hugely better.
So at least I'm happy that I have some control over his body. I just need to figure out the relaxation (or rather lack of it) issue so that I can start to work on contact and start to influence his frame a bit. It'll come. Especially when I can ride more consistently because it's not snowing or freezing. So, for like two weeks in July. (Fun fact - my city has had snow fall in every month of the year except July.)

By the time I finished with Cisco I was definitely not riding Phantom. She came in just to eat and so that I could check her bump from the previous day. It was still there. About the same size. She was maybe a bit uncomfortable and trying to keep full weight off of it while eating, but I was maybe being paranoid. I'm just hoping it doesn't turn into a hematoma (or hematomato as I like to call them).
at March 28, 2018