I stayed home from the barn on Monday and Tuesday in an attempt to recuperate from the lack of sleep that Daylight Savings Time brings on. I love the extra light at the end of the day, but man, it's really hard to get to bed at a decent hour for the first few nights. Especially when you turn on Netflix and find a bunch of shows have new seasons. Like Broadchurch and Jessica Jones.

Wednesday was my day off, and since it was freezing cold in the morning when I woke up (-15C - really?) I decided that I would just go out in the evening after teaching the one lesson I had in the late afternoon, with the hope that I would be good to ride both ponies.
I grabbed Cisco from the field first. He's been more laid back and relaxed lately. Unfortunately, he's also been testing some boundaries. And on the way in, he nipped the sleeve of my jacket with his teeth. So I had to go all screaming crazy woman on him. He seemed a little contrite the rest of the way into the barn.

There was a jumping lesson going on in the arena when I took him over. I intentionally rode him first because he needs to be worked more with other horses.

He's had the last two days off, and because of the lesson, I didn't lunge. I was hoping that I wouldn't regret that decision.

He was quite fussy about his mouth. He kept throwing his front left leg out as we were walking around, and dropping and curling his neck. I was thinking that maybe he wanted to scratch his nose on his leg, but he didn't actually try it. Otherwise, I just ignored his drama.

We walked for quite a bit at the beginning, mostly because I was trying to stay out of the way of the other riders. He did eventually settle and could walk on a longer rein but it took longer than usual.

At a trot my goal was to just get forward. He's been a bit sucked back the last couple of rides, so we needed to re-establish the go buttons. He was pretty good about it for the most part. He gets distracted when we ride with others, and is a lot more bulgey than he is when I ride by myself. We also can't seem to ride deep corners at all. This is where we just need a bunch more miles, but it sure is frustrating.

No canter today as I didn't want to be on him with no one around.

I also got a ride in on Phantom.

I am still getting used to riding two different horses, and the different ways that they feel. When I first trotted Phantom to the left, I thought she felt terrible, and not overly sound. The Equisense disagreed with me. I checked it when I came back to walk, and it gave us a symmetry score of 7.7 for that first trot. 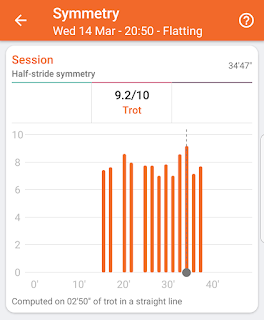 We actually finished off with a score of 7.7, which has been our highest symmetry so far. We had a high point of 9.2. She felt fine after the initial trot, so I'm thinking it might just be the difference in horses that I felt. Does that ever go away?