Since I hadn't planned on riding on Sunday, but ended up riding Phantom, I decided that I would just lunge Cisco. He hadn't done anything for five days, there were dressage lessons on all afternoon, and when I was ready to do something with him it was mid-afternoon and I had only eaten a muffin all day. And it wasn't a Costco sized muffin. So I was not up to hopping on.

I haven't lunged him very often in side reins. I think I've done it maybe twice. It's something that I want to start adding, so it seemed like a good time.

He was a twit about standing so I could get him set up when we arrived in the arena (New horses to make friends with! I must visit them!). Once I sent him out on the circle, the side reins were left long, but surprisingly, he seemed to be reaching for them. I might have to start riding with a long rein and see how that works out.

He wore the Equisense while I lunged him. Because he was on a circle the whole time, there is not a score for symmetry (need to trot for 20 seconds on a straight line to trigger a symmetry score).

Here are his lunging numbers: 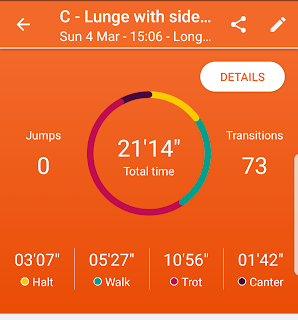 I lunged him for just over 20 minutes. 73 transistions seems really high, but I guess it would include all the times he fell out of canter. I did ask him for a lot of transitions, but not that many. 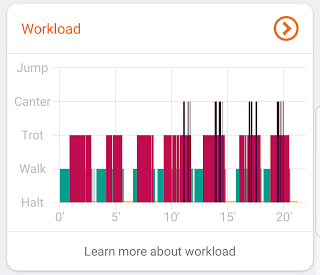 Workload - You can see all the transitions here. They were generally quick transitions - trot, walk a couple steps, back to trot. He had some nice trot transitions - he didn't keep a frame through them, but had a bit of lift in front. And when stepping into canter, he literally stepped into canter. Nice and soft. 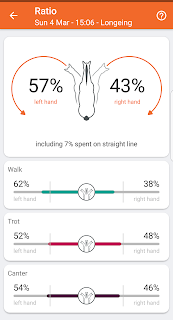 The big difference in the amount of time we spent going left was likely due to the time he spent walking right at the beginning as warm up, which was to the left. His left lead canter is also his weaker side, and the transitions tends to be a bit stickier, so I will often do a couple more on that side. 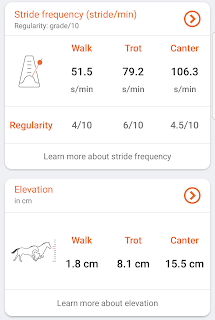 Stride regularity - it was nice to see that the trot was a 6. His canter tends to be erratic, but not in an unbalanced, scrambly, quick way. It's more of a very balanced, super slow canter, that I need to keep sending forward.

Elevation - Phantom had an elevation score at a canter of 15.9cm. I am surprised that Cisco's is lower at 15.5. Maybe it's because he was quite relaxed, so was a little longer and lower in his frame, especially with the sidereins on. Maybe this number is indicative of the difference in the training levels. It will be interesting to see how this number changes.

So that gave me preliminary numbers for both horses.

We're still in the midst of some fairly cold weather, so it might be the end of the week before I can ride again. But then it looks like spring might actually be here - there are a bunch of days that the temperature is supposed to get above freezing. Phantom doesn't think so - I don't think I've seen any hair fall off of her yet.