Our summer went from rain almost every day for 3 or 4 weeks in a row, to pretty well no rain since the first week of July. And it got hot. Pretty well as hot as we get.

Cisco reacted by picking up a cough. Which turned into a bit of an asthma episode.

The paddock that the ponies live in is alongside the road - a dirt road. When it's been as dry as it's been of late, passing cars kick up quite a bit of dust.

I've wondered in the past if that dust could be causing problems. Cisco has had a bit of a cough other summers for short periods, but I was never sure if it was the dust, the heat, or some years, the air quality that caused the cough, and it never seemed to last for more than a few days. 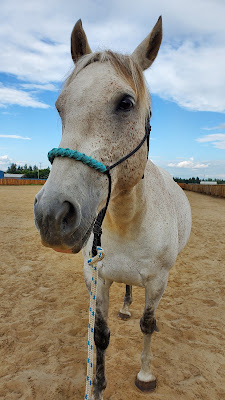 This year, he coughed a couple of times through a couple of rides, and then on one ride he was coughing so much when I tried to trot that all we did was walk for half an hour. When I went back out two days later, his respiratory rate was noticeably up and he was coughing at rest.

I put him on Ventipulmin for about 4 days and talked to the barn owner about moving him to another pen further away from the road to see if that made a difference. It's a single horse pen, and I prefer my horses to be turned out with buddies, but breathing is kind of necessary, so we'd both have to suck it up.

I think it has made a difference. I haven't heard him cough at rest since that one night. The only ride that I've done (it's been too hot to ride after work most of this week) was much better, though he still had one coughing episode after about 20 minutes of trotting. I hadn't intended to do much on that ride as it was only a few days since the night his respiration was up, though Cisco had other plans and was a wee bit sassy about everything.

At one point about 10 days ago I almost said fuck it and ordered a Flexineb nebulizer, but I didn't, although I'm still thinking of it. I'm just trying to figure out if using it with just saline is of benefit or not. Since Phantom also has asthma and gets Ventipulmin before rides, the nebulizer could get enough use to justify the $1500 price point. We'll see. If this continues with Cisco and he sees a vet I'll have a discussion with them about it, as it will work best with prescription drugs.

We'll see how it goes this week. The temperatures are forecasted to be much cooler and we will hopefully get some rain. I also want to see if there's somewhere where I can put both ponies away from the road for the rest of the summer. There are paddocks next to where the arena was/will be that are empty, but I don't know if there is access to put water out due to the arena work.