Although I had last week off, I didn't get a ton of riding in. It was just too hot for most of the week, and I don't do heat very well.

I'm still not sure how he's doing with his breathing. I've had some rides under saddle that he seems fine, and others where I'm not happy with his recovery and ended up giving him some Ventipulmin post-ride. One of my vets is coming out to the barn on Thursday and I've added Cisco to her appointments, so we'll see what she says.

We also did another car ride last week. I think Cisco has figured out that if Phantom is in the trailer with him, he's going to get locked up and the murder box will start moving. He was not very good about getting on. But I stuck with it, and he got better, and away we went. He was about half as sweaty as the previous ride upon arrival back home, with no dripped sweat marks on the floor of the trailer, so that's progress over the previous ride.

What else has happened?

I was bad and bought a new saddle pad at the Greenhawk summer sale this weekend. It was black, and I have more than enough black saddle pads - but I don't have a snakeskin print one! 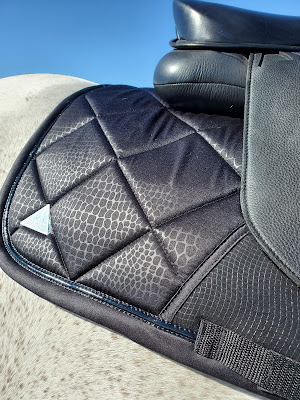 I'm a sucker for reptile prints (hence my crocodile patterned boots), add patent leather piping to it and I'm gonna have to buy it. It was 40% off, so that made it totally affordable.

Phantom's Rambo fly sheet was repaired by yours truly. I picked up some sewing machine needles more suited to horsewear as I have a few blankets that need minor repairs before winter and I'm going to try to do them myself. I can sew straight lines, but not a whole lot more, but the ponies won't complain if the seams aren't straight.

For the tears on the fly sheet I used a strip of Rambo binding that had come off the neck piece and didn't really need to be put back on. It got cut up into smaller pieces to patch all the holes, but I didn't think to check that the pieces made actual words. Seeing this patch on her side makes me giggle. 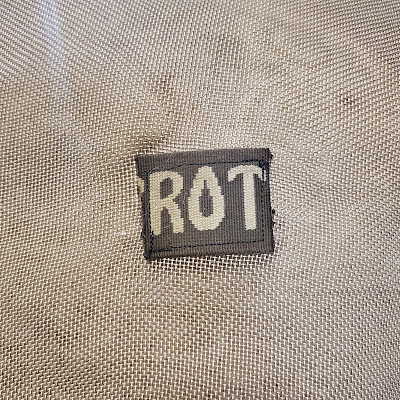 And, just today, I finally got my car back! It was a full six weeks since I dropped it off. The extra week was because something happened to it while in their care (relatively minor) so they had to fix that as well, at their expense. But I'm back to driving it. Please - no one hit me again!

It looks like we are going to be stuck in this heat wave for another 10 days or so, and since I'm back at work and will have to ride in the evenings, there probably won't be much riding happening. We'll try to get another car ride or two in though - maybe we will be ready for a field trip in September when I'm off.