The Attack of the Flies

Poor Cisco. This summer has been a bit hard on him.

Apparently, the flies have been attacking him. There were enough bug bites on his neck when I took his blanket off that I was initially worried that he had hives, but under the blanket he was fine.

Taking the blanket off revealed something else however - a very swollen sheath. 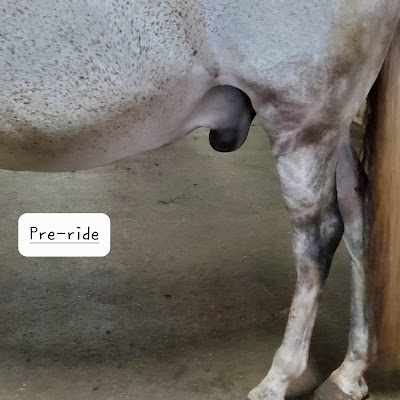 I'm assuming that it's due to the bugs, and maybe not moving around as much as he is still in the individual paddock. There was also some evidence of some edema having been on his chest, with just some saggy skin left over.

None of that was there on Monday when I was out, so it had all just happened in the last couple of days.

I hadn't planned on riding, but needed to get that swelling down. I dug around in the car and found a pair of fleece-lined leggings that would have to do (it wasn't hot enough that I would die with them on, but it would be warm) and didn't plan to do enough that my lack of a sports bra would be an issue.

I'm pretty sure that I felt a waddle in his step. The footing in the outdoor was a bit damper than ideal so we tried to keep it to a quiet trot in the half of the ring that was usable, and by the end he felt better than he did at the beginning.

He had some bute before the ride, and I think the swelling close to his body came down a bit after exercise. It was still pretty fat though.

I've got to pick up some Swat today and will apply it liberally to his bottom bits and see if that helps the bug situation. I'm still trying to decide on where he stands regarding his asthma, and if the swelling stays up over the weekend I guess we'll have to see the vet next week for an all-over check-up..