You Try To Do Something Nice For Someone...

I was scheduled to teach a lesson on Sunday morning. Alas, the storm that merely threatened in my area of the city overnight apparently hit full force at the barn. They had pouring rain for at least two hours, leaving everything very soggy in the morning.

No worries. I was up and ready to go so I went out early anyways. I mean, I was already in the car when I found out, but was still in the garage, so there wasn't much point in heading back into the house (although I was tempted for a moment).

Since the road wasn't going to be dusty, I decided that I would put Cisco back out with Phantom and his recently returned from summer camp BFF Pete. He'd have a couple of hours to socialize and move around a bit more than he will in the individual paddock he's been in for a few weeks.

It all started well. Cisco and Pete immediately sniffed each other with no squeals or strikes, and Phantom emitted huge fuck off vibes so Cisco smartly stayed out of her bubble.

They had gone down to the far end to look for the few blades of grass that might have been previously missed. Cisco was trying really hard to encourage one of the others to play with him, but not being overly rude about it.

Phantom got down to have a roll, and I got the video ready thinking that when she got up she would take off and hijinks would ensue. Wrong. She got up, shook herself off, and went back to searching for that elusive blade of grass.

They were being boring so I was just about to leave the gate and head back to the barn to find something to keep me occupied for a couple of hours when somebody made a break for it and they all galloped towards me. There was some leaping around, mostly by Cisco, and then I don't know if Cisco got a bit possessive of Phantom, but he kicked out at Pete - and one hind leg went right through the fence, and got stuck on the other side.

Just the good bit in slo-mo.

The bar that he got his leg over was pretty well at the same height as the front of his leg extended behind him. His leg was in a flexed position, so the bar was resting on the flexed front of his hock.

I tried to grab him by his hoof and lift the leg up, but that did absolutely nothing. I had yelled "help" a few times as I knew there were a couple of people around, but no one came running. I frantically called the BO's SO, who I had chatted with a few minutes earlier, and told him my horse was stuck on the fence. He had just gotten to the gate when Cisco shuffled his front legs just a bit which put him at a different angle to the fence, and his leg mostly slipped free, with just a bit of assistance needed from me to get the rest of his hoof clear. Phew.

He was probably only stuck for 2-3 minutes, and thank God, he barely moved. I was behind him, and he knew I was there, but I'm honestly surprised that he didn't try harder to escape, although I'm not complaining! In the video you can hear me saying "stay there, stay there" to him as I was running towards him, and had a moment of panic wondering if me running at him would cause him to panic. That might be something useful to teach your horse - not to run away if you run at them!

Poor Cisco was a bit shaken up by this. He wouldn't let me catch him right away, though I had him within a minute or so. We went into the barn, he had some bute, and I hosed off the leg. The scrapes all seem to be superficial, so I'm not too worried about them. I'm much more concerned that something will have happened to his stifle, not that there is currently any evidence of it. He was maybe a bit off at the trot within about 15 minutes of the incident, but I was trotting in hand and trying to evaluate, so I'm not quite sure. 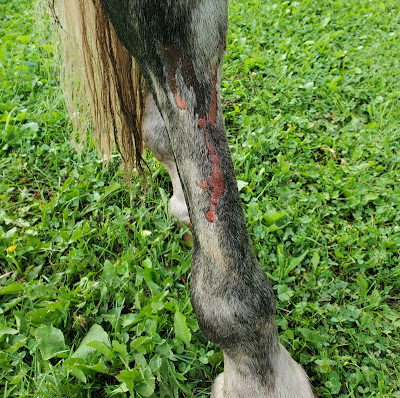 Hosed off and waiting to dry. 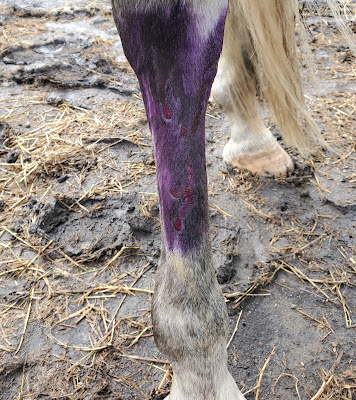 Emma - this coating of Blu-Kote is for you!

I won't be surprised if his leg blows up by the morning. One of the ladies who rides with me is going to have a look at him in the AM and give him some bute if it got big or seems sore, and I'll be out in the evening after work, armed with wraps and maybe ice packs. Fingers crossed that he won't be worse than a bit stiff for a few days.