I picked up a pair of sisters as riding students at the beginning of the summer. They are at a similar riding level - solidifying their position at all gaits and getting more comfortable with riding a canter - but are completely opposite in their confidence. One is very brave and willing to try anything, the other worries and has a hard time releasing tension. She's actually made some great progress since she started with me - the first couple of rides were all about how it's actually easier to ride when the horse is going forward, and now she's a speed demon who I have had to tell to slow down the last two rides.

One of the other instructors at the barn goes away to do a summer camp every year and as she owns most of the lesson horses, they also go to camp. Usually, the barn owned horses don't go, but this year I was told only one would be staying. (That instructor runs most of the beginner lesson program, with her gone for the summer there is very little need for lesson horses.)

This left me with the issue of coming up with two horses so that the sisters could ride at the same time. It was just going to be for three lessons as they were going away for the full month of August.

I voluntold Cisco to be a lesson horse for a couple of weeks.

The more confident sister rode him, and the less confident one rode the horse usually ridden by the other sister. It was actually a good change for her and she did well on him.

Cisco wasn't really sure about his situation. There were definitely some strong side-eye glares aimed my way, and I had to try to keep my distance from whatever exercise they were doing because he really wanted to gravitate to me. But overall, he was a pretty good boy.

I had told her at the beginning of the ride that he was a very wiggly horse and when it came to wanting to bulge towards the gate, he wouldn't give up. She definitely agreed with me by the end of the ride!

She loved his canter - we've been working on sitting the canter instead of perching tipped forward for it - and Cisco has a very easy to sit canter.

The only thing that he was sticky about was, oddly, the halt walk transitions. Not really sure why, as she is pretty light in her contact, but that will be something I'll play with a bit in my rides. 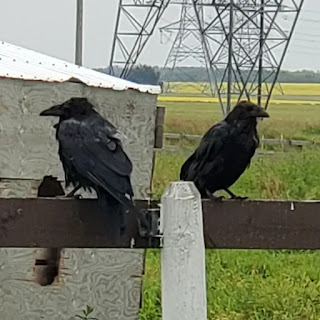 The resident ravens are a little put out by the removal of their arena roof perch that they loved to hang out on. Now they have to sit on a fence or horse shelter roof to shriek their someone's being murdered screams.

I'm not convinced that she loved riding him overall though (which I'm only slightly offended by).  Maybe it was the wiggliness, or it might have been my saddle. It doesn't matter though because hopefully I won't have to subject the poor pony with that misery again (his words, not mine).

I was very happy with how Cisco went for a different rider. He hasn't had many other people on him (I don't really like to share my ponies) but whenever he has he has been very well mannered. It's a good life skill for horses to have.