Who Wore It Better?

I'll hopefully be mostly over this whole flu-thing in the next couple of days. It looks like Mother Nature is planning to cooperate (for a week or so at least) and my work schedule isn't crazy. I might actually get a couple of rides in this week!

Part of the prep for getting back in the saddle is getting the ponies clipped. Both of them have big wooly coats. Phantom is definitely the woolier of the two, but Cisco seemed to grow more this year than he did last year.

Sunday was a beautiful day, so a perfect opportunity to create some semi-nekkid ponies. I stopped off on my way out to the barn at the dollar store to pick up a couple of things - some kind of sanitizer spray so that I could wipe the mouse smell out of my tack locker, and a disposable painting haz-mat suit. I've worn one over my clothes the last couple of times that I've clipped and it's been fantastic at reducing the amount of hair that ends up attached to me.

But they didn't have any. And I didn't feel like driving around to find one. So I sucked it up and clipped in the clothes I was wearing. Which wouldn't have been too bad except that I wore a bra. I don't usually wear a bra when I clip, just a thicker shirt. I'm so not going to do that again! The girls will forevermore be free when I am clipping! 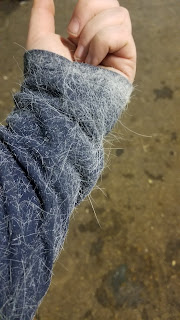 The kids were both pretty well behaved and my Lister Star clippers got the job done pretty quickly. They got their normal variation of an Irish clip and somehow I managed to get both sides pretty even on my first attempt. It doesn't usually happen that way.
Phantom, aka the Polar Pony, was quite warm when I brought her in, so I'm glad I got her clipped. The weather has been pretty nice for the last couple of days, but it's hard to blanket. Today's daytime high was just over freezing in the lovely sunshine, but it's supposed to feel like -19 celsius tonight. Those 20 degree swings are hard to figure out how dress.
Hopefully, the new racing stripes won't give them any bad ideas when I get on them on Wednesday or Thursday!